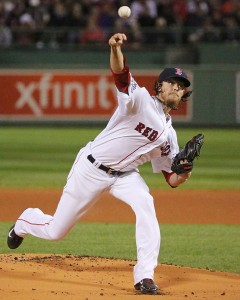 With the signings of Hanley Ramirez and Pablo Sandoval squared away, the Red Sox can now shift their focus to retooling the top of the starting rotation. As has been the case the entire offseason, Boston seems poised to bring back their former home grown starter turned staff ace, Jon Lester. Currently headlining the free agent market, the 30-year old has drawn the most significant interest from the Atlanta Braves and the Chicago Cubs, in addition to the Red Sox. While clubs such as the San Francisco Giants, Seattle Mariners, and New York Yankees are believed to be lying in the weeds on Lester. Whichever team the southpaw decides to go to will certainly be expected to dole out a large commitment to the former 2 time World Series Champion. Recent reports indicate that both the Red Sox and Cubs are expected to offer Lester a 6-year deal, in the neighborhood of $135-$140M. The Braves are also a club that needs to be watched with a careful eye on Lester’s market. Outside of being a solid veteran presence in their young rotation, the left-hander also makes his home on the outskirts of Atlanta, and recently bought a house in the area in which the Turner family will erect the new Braves ballpark. Aside from Lester, the free agent market also features top of the rotation starters like Max Scherzer and James Shields. Before the offseason even began, most baseball scribes thought Shields-to-Boston was all but a foregone conclusion. However, we have yet to hear if Boston has so much as reached out to the right-handers representatives. Scherzer, also a 30-years old, also hasn’t been in connection with the Red Sox as of yet, but could become an option if Lester signs elsewhere. Instead of the free agent market, Boston’s starting pitching salvation might be better attained on the trade front. Boston has rare offensive commodities and some young, controllable prospects that could entice clubs like the Nationals and Reds, just to name a few. Washington’s Jordan Zimmerman or Doug Fister would fit nicely atop the Sox rotation, as would Cincy’s right-handers Mat Latos or Johnny Cueto. These options, are just a few of the potential avenues that Boston can explore when looking to upgrade their rotation.

We got Panda and Hanley? Seriously? where have I been ? WOW #RedSoxNation ??