Where Do the Red Sox Stand in the AL East Right Now?

MLB’s offseason has only just begun, but already the Red Sox have dipped into the free-agent market. While Boston still has work to do (have you seen the club’s projected starting rotation recently?), Ben Cherington has spent nearly $200 million in adding Hanley Ramirez and Pablo Sandoval to the roster, and it’s only December 3.

For the most part, the Red Sox are probably finished with signing position players, and a trade or two is likely to help mitigate the club’s glut of outfielders. Even this early in the offseason, then, we can get an idea of just where Boston stands in the division, and how much Cherington should look to improve the team.

Over at FanGraphs, there is a tool that combines the site’s own Steamer projections for the 2015 season with curated depth charts to estimate each club’s WAR totals for next year. Now, you can certainly object to WAR’s accuracy as a statistic (truthfully, it should never be taken alone as the be-all and end-all of measuring a player’s value), but these depth charts provide a pretty good proxy of just how deep and talented each team’s roster is. 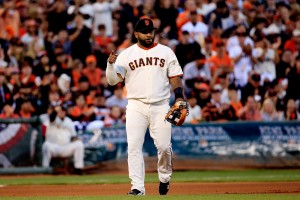 With that in mind, here is how FanGraphs’ projections currently view the AL East for 2015 in terms of WAR:

A couple caveats before analyzing this: (1) All five of these teams will make moves before the start of next season (the Yankees have been suspiciously quiet so far this offseason) and (2) these are based on projections, some of which might weight a player’s past performance a little too heavily or be a little unkind to younger players.

Still, it’s interesting to see the Red Sox sitting above the Jays, even after Toronto’s trade for Josh Donaldson is factored in. Boston does have a deep lineup, and Steamer expects a wide cast of players to provide value, even some—such as Allen Craig, Daniel Nava and Brock Holt—who will likely be given bench roles next season (if they’re not traded beforehand).

Boston ranks third in all of baseball in these WAR standings, behind the Nationals and just on the tails of—surprise—the Mariners, who are the highest-rated team in the AL.

The Rays also look to be in better shape without David Price than some might expect. These projections don’t factor in the losses of Joe Maddon and Andrew Friedman, of course, but it’s important to keep in mind neither of those two really have a quantifiable impact on the club’s on-field performance.

There might be signs here of some impending regression for the Orioles, who did have a few things break right for them in 2015, and won’t be welcoming back Nelson Cruz after the outfielder signed with Seattle.

Here is how Steamer views the Red Sox lineup and pitching staff, which I’ve taken from the Baseball Prospectus affiliated Roster Resource:

I’ve left out Yoenis Cespedes here, which might prove to be a mistake, but he seems the most likely to be traded before next season. As stated, the Red Sox have a pretty deep and balanced lineup, and that’s even with Steamer hating Rusney Castillo. These projections are likely based on Castillo’s performance in Cuba, which don’t take into account the body changes he’s made since and how much he impressed during a brief stint in 2014.

It’s clear where the Red Sox have to improve (you didn’t need to read this article to figure that out), but it’s also instructive to see where Boston sits compared to their divisional counterparts. There is a lot of talent on this roster, and while their lack of pitching depth is a bit worrisome, it also gives Cherington a clear way to continue improving the club’s outlook for 2015.

Add in Lester (or an alternative like Cole Hamels) and another starting pitcher, and the Red Sox should feel pretty good about their position heading into next season. Fans should certainly be wary of expecting success—the 2014 campaign taught us how easily things can go awry, after all.

Nevertheless, Cherington has done a good job accruing assets and adding talent to the roster dating back to July’s trade deadline. The Red Sox just need a couple more pieces, and they know exactly the type of players they should be looking for.