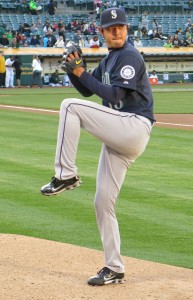 Although Jon Lester still has yet to make his final decision, that shouldn’t stop the Boston Red Sox from exploring other avenues of improving their starting rotation. Lester by and large is the big fish that the team is trying to coax back to Boston after shipping him out to Oakland at the trade deadline last season. However, Boston’s rotation needs aren’t just limited to finding an ace; the team also needs to add a number two starter. Yesterday, CBSSports.com’s Scott Miller wrote that an industry source insisted that the Red Sox “master plan” is to add sign one starter in free agency, and add another via trade. In that line of thinking, it’s plausible that the Red Sox could sign Lester, and turn their attention to the trade market in order to reel in a number two arm. Too me, this route is far and away the best option for Boston, as it would allow the team to retain all their top prospects, and not have to use them to obtain an arm like Cole Hamels or Chris Sale. Of course, Boston will still have to use some prospects in a deal, but it won’t have to be the big names like Blake Swihart, Henry Owens, or Mookie Betts. It’s realistic to think that a starters like Hisashi Iwakuma, Jeff Samardzija, or Mat Latos could be had in a deal involving Yoenis Cespedes plus two nice prospects like Garin Cecchini and a young starter like Matt Barnes or Anthony Ranaudo. Cecchini is a solid prospect with a lot of upside, but with Pablo Sandoval at third for the next 5 seasons and the outfield as crowded as it is, the 23-year old’s future in Boston looks bleak. While you can never have enough pitching, arms like Matt Barnes and Anthony Ranaudo could be used just as effectively as trade chips. In the end different teams will have different prospects they favor over others, like Oakland for example, who seem to gravitate towards short stop Devan Marrero. Still, Boston has enough quality pieces to acquire one of the afore mentioned starters without it being a detriment to their farm system. Outside of some nagging injury concerns, the only real downside to adding one of the starters listed above is that they’re only under contract for the 2015 season. But even that isn’t a huge concern, since the team can either extend him, or sign someone new in free agency next offseason.