The Red Sox became a much younger team in 2014, with many of the system’s top prospects making their major league debut. Despite these graduations, the farm system still retains good prospect depth. For the next few weeks, I’m going to highlight prospects to watch for next season at each position. First up, the middle infield positions. 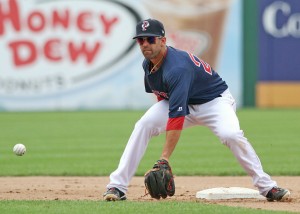 Marrero gives the Red Sox a strong depth option at shortstop if Xander Bogaerts falters. He shines at shortstop, with all reports stating he’s ready defensively for the majors. Questions still remain, though, on whether he will ever hit enough to be a regular starter. He was solid offensively for half a season at Portland, but hit only .210 in 50 games after a call-up to Pawtucket. He impressed in the Arizona Fall League, and could be a valuable trade chip this offseason as many teams look for help at shortstop.

Coyle shows intriguing power for a middle infielder, socking 40 extra base hits in 96 games for Portland in 2014. He’s had trouble with injuries, however, playing in only 150+ games over the last two seasons. He’s been a second baseman throughout his time in the minors, but the club began playing him at third base this year to give him some more positional versatility. Because he’s blocked at both positions by established players (Dustin Pedroia and Pablo Sandoval) and prospects (Mookie Betts and Garin Cecchini), he’s a prime candidate for a trade.

Asuaje was relatively unknown coming into the season, but he changed that by hitting .310/.393/.533 across two levels with 15 home runs and leading the Sox system in RBI. He also played four positions (2B, SS, 3B, LF) as the Sox seem to be grooming him as a Brock Holt style utility player. Asuaje doesn’t have loud tools on the field, and he cited his work ethic as his best attribute when I talked to him this August. If he continues to hit the way he did in 2014, he’ll continue to climb the prospect rankings.

It’s unusual for an 18 year old player to get a full season assignment, but Rijo earned that with the Greenville Drive out of spring training. He more than held his own for the Drive, hitting .254/.348/.416 with nine home runs and 16 stolen bases as one of the youngest players in the league. This Dominican second baseman could shoot up the Red Sox prospect rankings in 2015 as he gains more experience.

Guerra draws rave reviews from scouts for his defense, but the Venezuelan shortstop also impressed this past season at the plate. He was a key part of the Red Sox Gulf Coast League team that won the league championship. While he’s a long way from the majors right now, he’s the most intriguing shortstop prospect in the lower minors for the Red Sox.