The “Prospects To Know” series continues this week with the Red Sox corner infield prospects to watch in 2015. 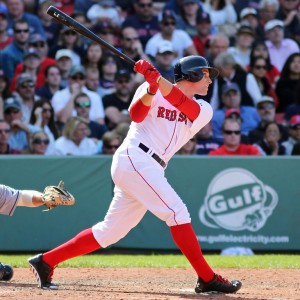 2014 was a season of highs and lows for Cecchini. He made his major league debut on June 1st this year, collecting his first hit in the majors in that game. On the negative side, he experienced his first major slump as a professional player. He struggled through June and July in Pawtucket, hitting .193 with only nine extra base hits, and 36 strikeouts to 12 walks.

He did manage to get back on track in August, and played well during a cup of coffee for Boston in September. He still profiles as a solid bat at the big league level, with a good chance to hit for average and get on base. The two questions remaining are with his defense at third, and whether he’ll hit for enough power to fit the traditional third base mold. With both third base and left field blocked, it remains to be seen whether the Red Sox will keep Cecchini as a depth option or deal him to another club.

A left-handed first baseman, Shaw led the Red Sox minor league system in home runs in 2014 with 21. His .278/.353/.473 line across two levels was a nice rebound from his 2013 season where he struggled at Double A Portland. With power a hot commodity in baseball right now, Shaw’s value seems to be rising. Currently blocked by the glut of 1B/3B/OF types on the major league roster, Shaw could be an asset for another team looking for power at a low cost.

The Red Sox took Travis, a right-handed hitting first baseman, with their pick in the 2nd round of the 2014 amateur draft. He showed the ability to hit for both average and power in college, and that carried over in his brief time with the Red Sox. He hit .316 combined between Lowell and Greenville, with his power showing in 25 extra base hits in 67 games. With three years of college experience under his belt, he will likely start the 2015 season as the first baseman for the High A Salem Red Sox.

Devers was already on scouts must-see list after the Red Sox gave him a $1.5 million signing bonus out of the Dominican Republic. In 2014, his performance exceeded the hype as he ripped through two levels of rookie ball. He started with the Red Sox Dominican Summer League team, and was so impressive there that he gained promotion to the Gulf Coast League club. Overall, the eighteen year old hit .322/.404/.506 with seven home runs over the two levels.

He’s got massive potential at the plate to hit for both average and power. Defensively, it remains to be seen whether he can stay at third base. Still, with the offensive upside he possesses, his bat could carry him all the way to the majors if he progresses the way people think. Devers has the highest potential in the entire system and could be the club’s number one prospect by the end of next year. He was so good in 2014 that he might skip Lowell and start with the full season Greenville Drive in 2015.

The Red Sox selected Chavis with their first round pick in the 2014 amateur draft. The infielder played multiple positions in high school, and the Red Sox had him split time between third base and shortstop while getting his feet wet with the Gulf Coast League Red Sox. He was considered one of the most advanced high school hitters in his draft class, and could earn an assignment to full season Greenville if he impresses during spring training. He’s definitely a prospect to follow during 2015 in his first full professional season.