The Red Sox didn’t spend much time wallowing over the loss of Jon Lester to the Cubs. In less than a day following Lester’s decision to sign with Chicago, Ben Cherington added three starting pitchers to Boston’s roster as the makings of the 2015 club begin to take shape.

On Wednesday evening, the Red Sox struck a trade with the Diamondbacks, nabbing left-hander Wade Miley in return for young arms Rubby de la Rosa and Allen Webster along with a prospect who has yet to be named. The next morning, Cherington landed right-hander Rick Porcello from the Tigers, sending Yoenis Cespedes, bullpen arm Alex Wilson and low-level prospect Gabe Speier to Detroit.

Just an hour or so later, the Red Sox inked old friend Justin Masterson to a one-year, $9.5 million deal (plus incentives), giving the club further depth in the back of the rotation. 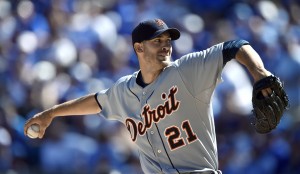 All the sudden, an area that looked like a clear weakness has turned into, if not a strength, a position with which the Red Sox can feel much more comfortable. And signs also point to Boston adding another starter in the near future, who might just be able to slot into the front of the rotation.

So what do Miley and Porcello give the Red Sox? Youth and cost certainty are the keys here. Miley is just entering arbitration and won’t hit free agency until 2018, while Porcello has only a year left on his current contract, but is turning 26 in December despite already having six years of experience in the majors.

Indeed, Porcello is a big get, and someone whose production might finally be lining up with his talent level. A first-round pick out of a New Jersey high school in 2007, Porcello is a ground-ball pitcher who has always had better peripherals than his results might indicate. That finally changed in 2014, though, when he finished with a 3.43 ERA and 3.67 FIP in 204.2 innings, striking out 129 batters and walking 41.

Porcello is the type of pitcher who needs a good defense behind him given all the groundballs he generates (career 52.1% ground-ball rate). Throughout his career, Detroit’s infield defense has been particularly woeful, and it’s little coincidence Porcello had his best season in 2014 when the Tigers finally did away with the Prince Fielder-Miguel Cabrera, corner-infield experiment and added a strong defender at second base in Ian Kinsler.

Boston will field a better defense behind the righty, and many believe Porcello is a good bet to improve upon his career numbers thus far over the next few seasons. Cherington is clearly banking on such a sentiment.

Much of the same can be said of Miley, who showed improved stuff and strikeout ability in his third full big-league season with Arizona. The southpaw posted a 4.34 ERA and 3.98 FIP last year, compiling 183 strikeouts and 75 walks in 201.1 innings pitched. Although that ERA might seem high, Miley suffered from an elevated BABIP (.317) and HR/FB rate (13.9%) in 2014.

But Miley also called Chase Field, one of the most hitter-friendly parks in baseball, home, and it’s likely his troubles with the long ball will improve away from Arizona. At the same time, the 28-year-old increased his strikeout rate to a career-best 21.1%, showing off an improved slider that he didn’t possess a couple years ago.

If Miley’s misfortune on balls in play and elevated home-run rate can improve next season, it wouldn’t be a surprise to see him perform like he did in 2012 and 2013, when he posted a 3.44 ERA over nearly 400 innings. Factoring in his move away from Arizona and improved strikeout numbers, Miley is a good bet to do just that.

Though Porcello and Miley are the big names, Masterson is an intriguing, low-risk piece for Boston as well. He can either fill in as a swingman in the bullpen or earn a spot in the rotation and move Joe Kelly to a back-up role. Given Clay Buchholz’s checkered injury history, Masterson provides some necessary depth and time for prospects like Henry Owens, Eduardo Rodriguez and Brian Johnson to continue developing.

Sure, missing out on Lester was a disappointment. But Cherington responded well, adding two young starters who have each made at least 30 starts in three straight seasons. That Boston gave up little of value (beyond Cespedes, who didn’t have a role with the club anyhow) makes the deals look even better.

Both Porcello and Miley come at a good price too, something that will continue to give the Red Sox financial flexibility moving forward. Boston signing James Shields to a long-term deal remains within the realm of possibility, and if Cherington wants to give up a prospect or two of consequence to add either Cole Hamels or Jordan Zimmerman, he can do so without plundering all of the club’s best prospects.

The Red Sox aren’t quite there yet; but they’re close, and with all the firepower they have on offense, a deeper pitching staff makes them look like legitimate contenders in the AL next season.