The Red Sox didn’t sign Jon Lester at the Winter Meetings last week, but they did come away with plenty of starting pitching help.

Perhaps the most notable of Boston’s additions is right-hander Rick Porcello, who the club landed from the Tigers after surrendering a package of Yoenis Cespedes, Alex Wilson and prospect Gabe Speier. Porcello is an intriguing guy, someone whose six full years of MLB experience belie the fact he will be just 26 at the start of next season. 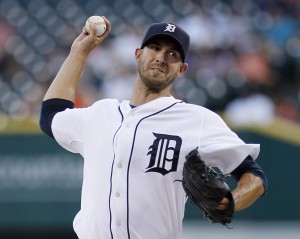 Rarely do starting pitchers so young enter the free-agent market (Lester and Max Scherzer are both 30 years old, for instance), which makes Porcello a unique commodity. It also gives the Red Sox more motivation to extend him before he is eligible to hit the open market next offseason. Young, effective starting pitchers are perhaps the game’s most valuable commodity, after all, and the Red Sox do have enough money coming off their books in the next few years to afford Porcello.

There are signs, moreover, that the New Jersey native’s trajectory is on an upward trend, that Porcello just might be coming into his own as a pitcher.

Here are his stats over the last three years with the Tigers:

By this point, you probably know Porcello’s story. He’s a groundball pitcher whose peripherals and FIP have long indicated he is better than his ERA often suggests. Porcello is someone who excels with a good defense behind him, and to many, it’s no coincidence the righty had his best season in 2014 when the Tigers’ infield defense finally improved.

But just what would an extension for Porcello look like?

That’s a difficult question to answer, though history provides us with some instructive examples. At this point, Porcello is projected to be worth roughly three wins in 2015, and given his age, we can expect him to maintain that level over the next few years. That makes Porcello an above-average starter—not a superstar by any means, but someone who can slot into the middle of a rotation and be a success there.

Given that average pitchers are fetching at least $10 million (and likely closer to $14 million) annually on the open market, Porcello will probably see an annual offer of $18-20 million as a logical starting point.

Recent extensions for pitchers similar to Porcello indicate this to be the case as well. Last winter, Homer Bailey signed a six-year, $105 million extension with the Reds at the age of 27.

Here is how Porcello’s last three seasons compare to that of Bailey’s just before he signed his extension (2011-2013):

In fact, Bailey provides a pretty good comparison for Porcello not just from a stats perspective but also as a pitcher who finally saw his long-held talent turn into results just as he was about to enter free agency. Porcello might even have an edge over Bailey given his better consistency and ability to generate loads of groundballs. Either way, Bailey’s deal offers an example from which the Red Sox and Porcello’s representatives can work off.

Giants righty Matt Cain is another useful case study. Cain was a better pitcher (something reflected in the stats) than Porcello has been before he signed a six-year, $127.5 million extension in 2012. He had also helped the Giants to a World Series victory and received two All-Star selections at that point in his career. Some of Porcello’s numbers are more similar to Cain’s from 2009 to 2011 than you might think, though it’s clear which pitcher holds the edge:

So we have two recent examples that demonstrate just where a Porcello extension might land—somewhere in the five- or six-year range and approaching $120 million in total. The going rate for pitchers of Porcello’s production level is roughly $20 million annually, which fits right in line with that potential deal.

Whether the Red Sox are willing to offer Porcello that kind of money is the question. They were reluctant to approach those kinds of figures in extension talks with Lester last spring, but Porcello is four years younger with, one expects, some improvement ahead of him.

Porcello’s interest in any extension is unknown as well. Scott Boras is no longer is agent, which has to be a positive, but the righty has made few public comments either way on the topic.

One other route Boston could go would be to offer Porcello less years and more money, a strategy they have shown a willingness to employ with players like Koji Uehara and Mike Napoli. A three- or four-year deal might be more attractive to Porcello anyhow, giving him some security while also enabling him to hit the free-agent market and cash in again at the age of 29 or 30.

Adding in an opt out to any offer for Porcello would serve the same purpose and might be more appealing if he’d rather not sign away six of his prime years.

Maybe Porcello has no interest in signing an extension. Maybe the Red Sox prefer to just let him walk after 2015 and net a draft pick through compensation when he signs elsewhere. Maybe the two sides talk and just can’t end up agreeing to a deal.

There are many reasons why Porcello’s stay with the Red Sox might not last long. But there are also plenty of reasons (Porcello’s youth and upside, Boston’s cash and talented roster) that an extension makes sense for both sides.

If Cherington and the club’s front office want to ensure long-term stability in the rotation, spending on Porcello might be the easiest way to do it.