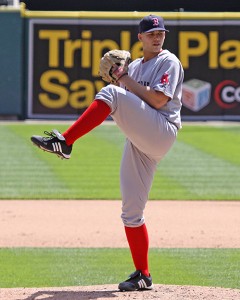 There’s a common theme shared by the trio of arms that the Red Sox acquired over a week ago, and it could be Boston’s key to success in the 2015 season. Over the past few years, Rick Porcello, Wade Miley, and Justin Masterson have built up a reputation as ground ball pitchers. The latter of which has proven to be one of the best in the league at keeping the ball on the ground. From 2012 – 2014, Masterson ranks third in all of baseball in ground ball percentage, posting a staggering 57.1% clip. In order to garner such results, Masterson has relied on his heavy sinker which he has thrown about half of the time over the last three seasons. However, Masterson’s success as a worm killer didn’t come without some tinkering. Back in 2012, the right-hander favored his sinker 58% of the time, and perhaps became too predictable as his ERA and FIP both rose by a full point. In two years following 2012, Masterson still favored his sinker, but didn’t rely on it as much. In 2013, the 30-year old toned down his sinker usage from 58.3% to 49.4%. In its place, Masterson increased his fastball percentage from 19.8% to 21.7%, and his slider usage from 19.5% to 27%. While his 2014 numbers were skewed due to injuries, Masterson kept the same general philosophy as in his 2013 campaign. The former second round draft choice threw his sinker 49.8% of the time, and tossed his fastball at a 24.8% clip. However, last season the righty posted the highest change up percentage of his career, spiking from 2.0 to 6.2. Additionally, Masterson posted his lowest slider percentage in three seasons, throwing it just 18% of the time. While Masterson still managed to post the second highest ground ball percentage of his career, he also amassed a 20.3 line drive percentage, which grades the highest in his seven year career. According to Fangraphs, his 2014 line drive percentage still manages to grade below league average, so perhaps injuries were more to blame than a deviation in pitch selection. However, there’s still a chance that the righty is trying to find harmony between his four pitches.