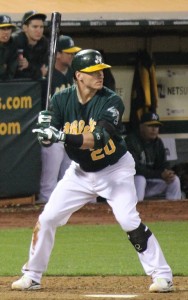 By now I imagine that we’re all pretty well versed in acquisitions that the Boston Red Sox have made so far this offseason, but they’re not the only team that has been busy in the American League East. The Toronto Blue Jays, who finished third in the division standings last season, added some thump to the middle of their order with additions on both the free agent market and trade front. The team’s first acquisition of the offseason, Russell Martin, inked a five year pact worth $82M. While a five year pact for a 31-year old catcher was met with some raised eyebrows, Toronto is banking on Martin’s production and leadership in Pittsburgh to translate north of the boarder. While Martin was a splashy move for the Jays, the team sent tidal waves across the MLB when they acquired Oakland Athletics third baseman Josh Donaldson for a package of prospects and Brett Lawrie. Donaldson will join Jose Bautista and Edwin Encarnacion in the middle of Toronto’s order, and bring with him a bat capable of producing 90-plus runs a season. According to Steamer projection system on Fangraphs.com, the combined wins above replacement for Martin and Donaldson amounts to close to 10.0. Aside from Toronto’s big additions, the team also added solid lefty platoon outfielder Michael Saunders, once promising first base prospect Justin Smoak, and spot starter Marco Estrada. The Jays offseason appears just about finished, but the team could still be in the market for a top of the rotation starter. Like the Red Sox, Toronto boasts a powerful offense, with a questionable rotation. Since coming over via trade in 2012, R.A. Dickey hasn’t been the Cy Young ace that he was with the New York Mets. While youngster Marcus Stroman and veteran Mark Buehrle anchor the middle of the staff, the Jays back end will also need to be addressed before the offseason is out.