The “Prospects To Know” series continues this week with the Red Sox outfield prospects to watch in 2015. 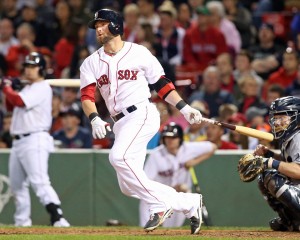 Brentz possesses some of the best power in the Red Sox system, but doesn’t make enough contact to get to that power consistently. He’s also had injury problems the last two years, missing out on chances to make the major league club as a call up. His strengths are his power and a strong arm in right field. He did hit 12 home runs for Pawtucket last year despite playing only 63 games. He also got a short cup of coffee with the Red Sox at the end of September. It’s hard to see a spot for him with the Red Sox crowded outfield situation, so he could be traded before the season starts, or kept in Triple A as a depth option.

Many prospects have excellent raw tools but struggle to turn them into baseball skills. Ramos looked to be one of the rare ones that can make the transition after a promising year in 2013 with the Salem Red Sox. He followed up that season by hitting .326/.368/.431 through his first 48 games with Portland in 2014. Unfortunately, at that point he fouled a pitch off his leg in a game, causing a stress fracture that ended his season. Fully healthy now, he’ll have a chance to push for the big leagues in 2015.

It was truly a breakout year for Margot in 2014. In his first taste of full season ball for the Greenville Drive, he showed off his speed on the basepaths and defensive ability in center. What was more surprising was how well the 19 year old hit, tearing up the South Atlantic League and earning a promotion to Salem at the end of the season. He hit a combined .293/.356/.462 between the two clubs, with 12 home runs and 42 stolen bases. His speed and defense might be enough to get him to the majors, but his ceiling is tied to how much he can hit. He should start the season back in Salem, with a chance to move quickly if he shows he can handle that level.

Drafted in the 30th round in the 2013 draft, the Red Sox convinced Longhi to sign with an overslot $440k bonus. He’s considered to have “an advanced feel to hit” (Kiley McDaniels, Fangraphs.com), and showed that with a .330/.388/.440 line in 30 games with Lowell this season. Unfortunately, he suffered an injury to this thumb that ended his season. With only 46 games played in the Sox system since he was drafted, he’s an intriguing prospect to follow for a full season in 2015.

Not to be confused with his twin brother Luis Alejandro (an infielder), outfielder Luis Alexander Basabe earned promotion to the Red Sox Gulf Coast League squad after posting an .887 OPS in the Dominican Summer League. He’s still raw, but has the tools to jump on the prospect radar if he can put it all together. The 18 year old will fight to make a full season roster in spring training, and he could be the next prospect to breakout similar to Manuel Margot.