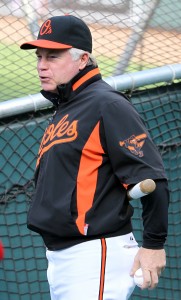 It’s been a pretty quiet offseason for the defending American League East champions so far this winter. The Baltimore Orioles, who finished the 2014 season with a 96-66 record, have done more subtracting than adding, as the team has watched Nelson Cruz and Nick Markakis find new homes. After signing a one year contract last winter, Cruz enjoyed a 40 home run season in 2014 and subsequently cashed in on the free agent market. The 33-year old signed a 4 year, $57 million deal with the Seattle Mariners in early December. Cruz’ departure wasn’t a surprise considering he signed a one year pillow contract with Balitmore, however Nick Markakis’ was a shocking revelation. Up until this offseason, the 30-year old had spent his entire 9 year career in Baltimore where he established himself as steady major league outfielder. A free agent for the first time this winter Markakis was given a 4 year, $44 million deal with the Atlanta Braves. While the departures of both Cruz and Markakis are big blows to the O’s lineup, there is still a little over a month for third year general manager Dan Duquette to figure out how to patch up his roster. In a weak pitching division, the Orioles still boast a formidable rotation and a solid bullpen; both of which finished in the top 5 in ERA and innings pitched in the American League last season. The Orioles will also benefit from the healthy returns of young third baseman Manny Machado and elite backstop Matt Wieters, who played a combined 108 games in 2014. While the Orioles could stand pat and still compete in the East, adding one more power hitting outfielder couldn’t hurt.