Friday Links: What could happen with the two spots “left” in the Sox pen 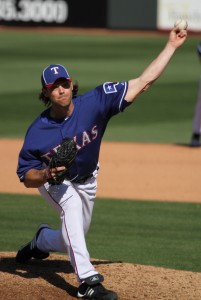 The bullpen will probably be the last area of the roster that Red Sox General Manager Ben Cherington adds to this offseason. The team currently employes five arms that one can consider shoe-in’s for the 2015 relief core, which leave two more spots up for grabs. The third year GM has acknowledged the teams plethora of internal options at both the minor league and major league level, but admitted his desire to acquire an arm externally.

The Sox currently have 4 right-handers in their pen and one southpaw, which leads one to believe that at least one of the potential relief additions will throw from the left side. Internally, Tommy Layne did a fine job in 30 appearances last season, touting a 0.95 ERA over 19 innings of work. However, if the team decides to look outside the organization, the free agent market holds a few interesting left-handed options.

Veteran southpaws Neal Cotts and Joe Beimel are two names that could peak Boston’s interest on the open market.

Cotts, 34, endured a mediocre 2014 season as a member of the Texas Rangers, posting a 4.32 ERA and a 3.58 FIP in over 60 innings of work. However, the Illinois native is just a year removed from his best season in the majors, tossing over 50 innings and posting a 1.11 ERA. When he’s right, Cotts has the ability to retire both lefties and righties, which is similar to current Boston southpaw Craig Breslow.

Joe Beimel, who hadn’t pitched since 2011 due to Tommy John surgery, enjoyed a productive first season back as a member of the Seattle Mariners in 2014. After starting the season is triple-A, the 38-year old returned to the majors and posted an ERA of 2.20 in 48 innings of work. Beimel, who was never known as a hard thrower, also managed to maintain his mid-to-high 80’s velocity on all of his pitches post-Tommy John.

While a trade is always possible, they’re also extremely hard to predict, especially for a reliever. But just to give some food for though, could Oakland Athletics lefty Sean Doolittle be available? Sure the A’s just inked him to a 5 year, $10.5 million extension last season, but the teams recent fire sale makes anything possible. The 28-year old lefty would be one hell of a replacement for Andrew Miller, and would give Boston the strikeout thrower that the pen desperately needs. Last season, serving as the closer for Oakland, Doolittle posed a 37.7% strikeout percentage, which ranked seventh among qualified major league relievers. Moreover, Doolittle could either be seen as the heir apparent for the 40-year old Koji Uehara, or could be immediately inserted into the closers spot.

Whether the Red Sox take a flier on a lefty like Cotts or Biemel, or make tries and make a splash for a big pen piece, we will most likely see the team grab a new lefty before the offseason is out. While Craig Breslow can be a reliable lefty, the jury is still out on whether Tommy Layne can go a full season with consistent numbers. That’s not to say that Cotts and Biemel are without a doubt reliable arms, but adding one could make for a Spring Training battle come April.

With David Carpenter being traded to the Yankees, the Carpenter-John Farrell deal for Mike Aviles has gone half-circle