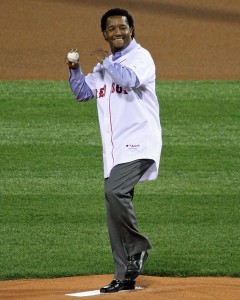 As I’m writing this the 2015 Hall of Fame election results have yet to be announced, but thanks to ballot trackers we have a pretty good guess as to who will join baseball’s greats in Cooperstown.

Among the 34 names on the ballot, most predict that former Red Sox ace Pedro Martinez will amass enough votes to be ushered into baseball’s hallowed halls. In his first year on the ballot, Martinez will bring to Cooperstown a 2.93 career ERA, three Cy Young Awards, and over 3,000 career strikeouts. Without throwing too many stats in your face, Martinez’s career numbers are made even more impressive when you considers the run of dominance the right-hander went on during the steroid era. He also had to deal with pitching the bulk of his prime years in the hitter friendly confines of Fenway Park, but that proved to be just another hurdle the Domincan Republic native cleared.

But when you boast the career statistics that Pedro does, simply getting into the Hall of Fame is the easy part. Deciding what cap the right-hander should don, however, is the hard part.

Martinez played his 18 year career as a member of five different teams; Dodgers, Expos, Red Sox, Mets, Phillies. For starters, I think it’s safe to rule out the Phillies and Mets here, as Martinez’s career sputtered to a finish as from 2006 to 2009. The Dodgers, who traded Martinez to Montreal in exchange for Delino DeShields in 1993, aren’t seen as realistic options either. Aside from only spending one full season as a Dodger, Martinez was primarily used as a reliever and only started 2 games for LA.Therefore, the two most likely caps to appear on Pedro Martinez’s Hall of Fame plaque are either the Expos or the Red Sox.

As a member of the now extinct Montreal Expos in 1997, Martinez emerged for as an ace for the first time. During that season, the then 25 year old posted new careers bests in ERA, innings pitched, strikeout-walk ratio, and complete games, just to name a few. Martinez was award for his breakout season by winning the National League Cy Young award.

Following the 1997 season, the Expos sold high on Martinez and traded him to the Boston in exchange for Tony Armas. As a member of the Red Sox, Pedro didn’t shy away from the bright lights of Boston, he thrived off of them.

I could go more in depth on the statistics, but I feel that what I’ve presented is enough to illustrate that Martinez should go into Cooperstown wearing a Red Sox cap. While his career as an Expo was commendable, his 1997 season was leaps and bounds better than his previous 3 years in Montreal. Excluding ’97, Martinez’s numbers as an Expo would feature an ERA close to 4.00 in 86 games started. If you were to take away his best season in Boston(1999), Martinez would still hold an ERA in the mid-2.00, over 1,170 innings pitched, and have a Cy Young Award to his credit.

Waiting for the Hall of Fame announcement like pic.twitter.com/RnZX9SlOgR