There is only one Pedro Martinez. That much is certain. And while the same sentiment has been used to describe any number of people, no one has ever been quite like Pedro.

I don’t remember the first time I saw Pedro pitch, or the first time I even heard his name. I was seven years old when then-Red Sox GM Dan Duquette traded for Martinez, and Montreal (where Pedro had already won a Cy Young award at age 25) might as well have been the North Pole.

But boy, it didn’t take long for Red Sox fans to realize just what they had in this undersized, overlooked hurler from the Dominican Republic. Pedro was a gift, someone we soon realized was anything but ordinary. You just knew, even in those first few summers he pitched in Boston, that a day like Tuesday was in Pedro’s future. 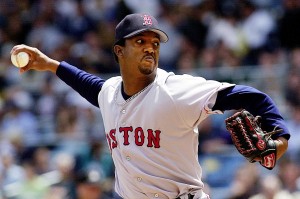 Out of all the players I’ve watched in my lifetime, no one belongs in Cooperstown more than Pedro.

The era in which Pedro arrived on the Boston sports scene is also important to remember. The difference between then and now in Boston could not be starker. This was long before the Red Sox’s storied run in 2004, or the Patriots’ trio of Super Bowl wins. This is when the Red Sox always finished second-best to the Yankees—always—and when a touch of the cynical pervaded not only Boston sports fandom, but also the city itself.

Still, in those first few years, when the Red Sox continued to languish behind the Yankees, we could always take solace in Pedro. Although we might never have the best baseball team, we had the best pitcher anyone had ever seen, which was darn near good enough.

I attended Red Sox games sparingly in those years, but through a repeated stroke of good fortune, Pedro always seemed to be pitching when I went to Fenway. At the time, Pedro’s starts were an event all their own, required viewing for anyone wishing to see greatness. The buzz of the crowd was always a little louder with Pedro on the mound, the hot dogs and cracker jacks a little tastier, the lights a little brighter.

One time, however, I went to Fenway with my family, and Pedro didn’t show up. He was supposed to start, but instead the Red Sox sent journeyman Bryce Florie to the mound in the top of the first inning. Needless to say, the Fenway faithful were more than a little perturbed that Pedro was nowhere to be found. A fan behind us kept asking, “Where’s Pedro!? Where’s Pedro!?”

No one had an answer. We all wanted to know.

Pedro was apparently late to the park that day, so Red Sox manager Jimy Williams decided to sit him as punishment. He eventually came on to pitch the final four innings in a 13-2 Red Sox victory over the Mariners. Three months later, Pedro won his second straight Cy Young award.

A few years after, in Baltimore of all places, I got Pedro’s autograph. I was visiting Camden Yards with my parents, and the Red Sox were playing the Orioles in the final series of the 2004 season. Pedro wasn’t starting, but he came out to do some throwing in between outings before the game. The field was abuzz with action—players taking batting practice, doing infield drills, shagging fly balls. Everyone in the stands had their eyes on Pedro.

When he finished up, Pedro did some light running. He ran into the open expanse of center field a few times and jogged back to the foul line. The hum of the crowd grew every time he neared the stands, and my hopes rose that he might actually sign a few autographs.

Eventually, finally, he finished up and sidled over to the stands along the third-base line. Immediately fans began crowding around Pedro, and I raced down toward the field with the rest of them. I slipped through rows of arms and legs and small openings until, somehow, I was right up next to Pedro. Nothing can stand in the way of a young boy and his favorite player’s autograph, after all.

When he took my ticket stub and returned it with his signature, I made my way back through the crowded rows, unsure of what to do next. Awestruck doesn’t begin to describe the feeling.

You better believe I still have that ticket stub.

When I remember Pedro, I don’t think of his stats or all the awards he won. I think about the primary reasons why I love sports and about what Chad Harbach wrote in his novel, The Art of Fielding:

“This formed the paradox at the heart of baseball, or football, or any other sport. You loved it because you considered it an art: an apparently pointless affair, undertaken by people with a special aptitude, which sidestepped attempts to paraphrase its value yet somehow seemed to communicate something true or even crucial about The Human Condition. The Human Condition being, basically, that we’re alive and have access to beauty, can even erratically create it, but will someday be dead and will not.“

When you watched Pedro pitch, you knew you were alive, you knew greatness—even perfection—was possible. Pedro was so good at pitching, he made you want to be just as good at something else—anything else, really.

Pedro was the end result of all the striving, all the hard work we put in to be great at what we love. And that type of knowledge and understanding goes well beyond the playing field.