Friday Links: A deal for Tyler Clippard would make sense for Sox 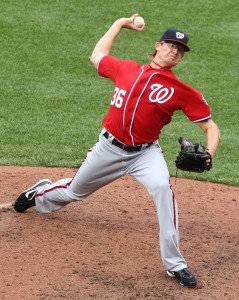 In an appearance on 93.7 WEEI on Thursday, Red Sox manager John Farrell admitted that the team is still on the hunt to add a strikeout throwing reliever before the offseason is out. This doesn’t come as a surprise at all, considering the Red Sox finished the 2014 season with a league average 21% strikeout percentage, and have since lost left-handed hurler Andrew Miller. Of course, the team can rely on high strikeout numbers from Junichi Tazawa and Koji Uehara, but outside of the two Japanese relievers Boston’s pen sorely lacks an arm that can set batters down on strikes. Red Sox newcomer Anthony Varvaro holds the next highest K% behind of 17.8% over the last two seasons, while Edward Mujica holds a comparable 17.5%. Craig Breslow, the Red Sox lone left-hander has the lowest K% among the current group of relievers at 14.1%.

With Boston in the market to bolster their relief core, the team could consider trading for Washington Nationals right-hander Tyler Clippard. A former prospect of the New York Yankees, Clippard has thrived as a reliever in the Nationals bullpen for the last 7 seasons. As the soon-to-be 30-year old is set to enter his contract season, Washington has discussed trading Clippard due to his arbitration salary hike and the teams depth in right-handed relief. In December, FoxSports.com’s Ken Rosenthal even went as far as to report that it’s “likely” the team deals Clippard before the 2015 season begins.

While the cost for Clippard is unknown at this time, I’d venture to guess that Washington would like at least one solid prospect for the reliever. For the Red Sox, that could mean a player like Sean Coyle who enjoyed a breakout season in double-A Portland last year. Coyle, who was just recently added to the Red Sox 40-man roster, hit .295/.371/.512 in 97 games last season, collecting 23 doubles, 16 home runs, and 61 RBI. Earlier this offseason, reports suggested that the 22-year old infielder was being discussed in a deal for Phillies left-hander Anthony Bastardo. While that trade never came to fruition, it spoke to Coyle’s value on the trade market. Boston could trade the young infielder and not think twice about it, since Dustin Pedroia and Pablo Sandoval will be at second base and third base for the foreseeable future. In acquiring Clippard, the Sox would obtain an arm that averages about 85 strikeouts a season, and is a virtual lock to toss somewhere between 70 and 80 innings.