The “Prospects To Know” series continues with the Red Sox top left-handed pitching prospects, highlighted by a strong quartet of lefty prospects in the upper minors. 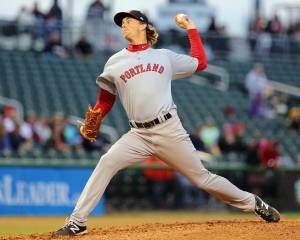 Owen’s 2014 season cemented his status as the top pitching prospect in the Red Sox system. He dominated hitters in the Double A Eastern league, striking out 126 batters in 121 innings pitched. He was named the Eastern League Pitcher of the Year after the season. The tall lefty features a low 90’s fastball with good deception and a terrific changeup. Owens needs to work on improving his curveball to finish off his repertoire, and will likely make his major league debut this season.

Rodriguez joined the Red Sox system at the trade deadline last year, coming over from Baltimore for Andrew Miller. While Miller was a valuable contributor, Rodriguez could help the club for years to come. He ripped off six impressive starts in Portland after joining the organization, with a 0.96 ERA and 39 strikeouts in 37 innings. His stuff was better after the trade to Boston, and if it’s permanent improvement he could challenge Owens for the top arm in the system.

Held back by injuries in his first two seasons with Boston, Johnson broke out in 2014. After a brief five start cameo in Salem to begin the season, he earned promotion to Portland. There, he actually posted a better ERA (1.75) and WHIP (0.93) than Owens. He’s not a strikeout pitcher, but he changes speeds well and mixes four pitches with excellent results. He’s close to major league ready and could be the first prospect to get a shot in the rotation if needed.

Escobar joined the Red Sox at the trade deadline last season, coming from the Giants in exchange for Jake Peavy. He entered the season as the #3 prospect in the Giants system according to Baseball Prospectus and ESPN’s Keith Law. He features a fastball that tops out in the lower 90’s and an excellent slider. With all the starting pitching depth that the Red Sox possess, it’s possible that Escobar moves to the bullpen in 2015 to give the club another left handed relief option.

Expectations were high for Ball entering the 2014 season after the Red Sox selected him seventh overall in the 2013 amateur draft. Unfortunately, he struggled in his initial exposure to professional ball, getting hit hard in his first few months. He improved as the season went along, posting a 2.96 ERA in his last ten starts. He still possesses the all the tools that made him such a high pick, but it looks like he will need time to reach his potential.

The Red Sox signed Enmanuel Dejesus and Jhonathan Diaz to large bonuses out of the Dominican Republic in 2013. Both pitched for the Dominican Summer League Red Sox in 2014. These are names to watch as they will likely begin their pro careers in the US in 2015.