How can Justin Masterson bounce back for the Red Sox?

While Red Sox fans are hoping that Ben Cherington adds another starter to the club’s roster ahead of Spring Training, the team has already done much of the heavy lifting in regards to rebuilding its starting rotation. Sure, Jon Lester is gone, and the idea of throwing loads of money at either Max Scherzer or James Shields is a tempting one. Yet Boston could trot out a starting staff full of established major leaguers if the season started today.

One of the new arrivals isn’t a fresh face, of course. After a subpar 2014, old friend Justin Masterson signed a one-year, $9.5 million deal with the Red Sox in December. And although fellow new additions Rick Porcello and Wade Miley come with more fanfare, Masterson’s ability to bounce back from a mediocre season might be the most important storyline for the Red Sox in 2015. 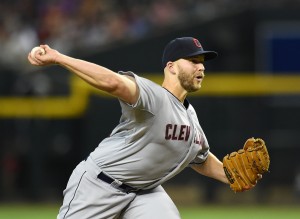 After all, Masterson is only a year removed from a stellar 2013 campaign in which he compiled a 3.45 ERA, a 3.35 FIP and 3.5 WAR in 193 innings pitched for the Indians. But in comparison with Miley or Porcello, Masterson is a more volatile proposition, someone whose performance the Red Sox can’t quite rely on in the same manner as their other two rotation newcomers. Still, that the 6-foot-6 right-hander is capable of pitching so well makes him a vital part of the club’s hopes to bounce back from a last-place season.

So just how can Masterson get back to his best in 2015? And what do his struggles last season portend for his future outlook?

Masterson’s health problems last year must first be acknowledged. The righty came into the season with sore ribs after a 2013 oblique injury, leading him to change his mechanics. A drop in velocity followed before Masterson suffered from a sore right knee and a right shoulder impingement.

These are the biggest and most obvious reasons for Masterson’s subpar performance. He wasn’t healthy, and his velocity and overall stuff declined as a result. Indeed, according to Brooks Baseball, Masterson endured a nearly four mile-per-hour drop in fastball velocity from 2013 to last season and averaged a career-low 90.97 mph on his four-seamer in 2014. Although he will turn 30 in March, such a large dip in velocity is rare for any pitcher unless some type of injury is involved.

At the same time, Masterson saw his control worsen, leading to more walks and harder contact against him. His walk rate ballooned from 9.5% two years ago to a career-worst 11.7% in 2014.

This likely led to opposing hitters making a higher quality of contact against his pitches. Masterson gave up more line drives (20.3% line-drive rate) than in any of his previous big league seasons, and his BABIP rose to .339, the highest of his career and the third-worst mark among MLB starters (min. 120 IP). Even just some simple regression to the mean should enable Masterson to improve in the year ahead.

A glance at his zone charts over at Baseball Savant indicates Masterson’s best pitch, his sinker, caught more of the plate on a consistent basis last season.

Back in 2013, Masterson did a better job of keeping his sinker down in the strike zone, where its movement and location can generate loads of groundballs. Two years ago, he held opposing hitters to a .259 batting average and .089 ISO with the offering, throwing it 44% of the time. At his best, Masterson pounds the lower half of the zone with his sinker: 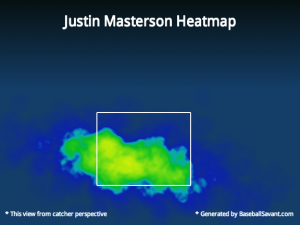 But last season, his mechanics and command deteriorated, which led to his sinker catching more of the plate and, even worse, the upper portions of the zone. It’s a subtle difference, but Masterson’s sinker lacked the precise control in 2014 it had the year prior: 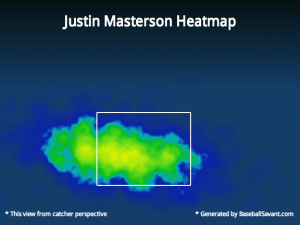 Masterson turned to his sinker even more often last season, throwing the pitch 53% of the time. But the results were far worse, with the offering yielding a .310 batting average and .155 ISO against.

With injuries affecting his mechanics and his best pitch catching too much of the plate, Masterson saw his home-run and line-drive rates both rise. In addition, many of the factors beyond his control—his performances on balls in play and with men on base—both worsened from the year prior.

All of this sets up Masterson for a bounce-back campaign, though the Red Sox will need him healthy first. If Masterson’s velocity returns and if he can refine his mechanics, there is little keeping him from a return to prominence. His slider, a pitch that was a big part of his 2013 success, remained effective even throughout his struggles last season and gives him a good weapon to pair with his sinker.

That Masterson had such a woeful campaign in 2014 makes him an uncertain proposition in the season ahead. Yet there are reasons to think he can regain his previous form, especially if his past experiences working with John Farrell provide some comfort for both sides.

A look at Masterson’s past reveals an inconsistent pitcher anyhow, someone who trades mediocre seasons for stellar ones every other year. The Red Sox have made a calculated risk in signing Masterson, and it’s one that could pay big dividends next season.