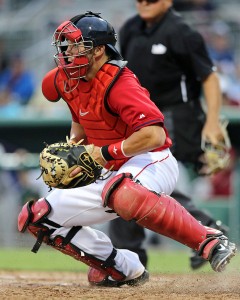 The Red Sox Tuesday trade of catcher Dan Butler didn’t just tie up the loose ends of the Craig Breslow signing, but it also pushed Blake Swihart further up on the team’s depth chart.

Swihart, 22, is considered the best prospect in Boston’s system and among the best young players on the minor league circuit. In time between double-A and triple-A last year, Swihart posted a .293/.341/.469 slash line, and collected a career high 13 home runs and 64 RBI. Along with touting a big bat, the former first round pick is also regarded as a slick defender, and holds a career 38% caught stealing percentage. While Swihart’s late season call up in 2014 limited him to just 18 games in triple-A, the New Mexico native figures to begin the new campaign as the Pawtucket Red Sox primary backstop, which should allow him to “season” some more.

With Butler out of the way, Swihart has now become the first line of defense if either Christian Vazquez or Ryan Hanigan hit the disabled list. While Boston has obviously has other catchers in the system, Swihart currently owns a spot on the team’s 40-man roster and would not require a corresponding move. Swihart is projected to be a September call up this season, but his big league debut could come before then if the Sox major league catchers are bitten by the injury bug.