Thursday Links: Red Sox right to wait for their ace 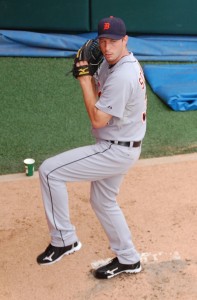 Max Scherzer is too much of a commitment. Cole Hamels will cost too many top prospects. James Shields wants an ace contract, but he’s a high mileage 33-year old. But the Red Sox need an ace!

Granted an ace would be nice to plant atop the rotation, but it’s not something that Boston should bend over backwards to try and add. A quick look around the American League East reveals a generally pitching weak division. Jon Lester, David Price, John Lackey, and Hiroki Kuroda have all left the AL East, CC Sabathia has regressed, and Masahiro Tanaka’s stellar rookie season was cut short due to injury. In turn, Baltimore Orioles righty Chris Tillman is arguably the best pitcher in the division right now, following a season in which he posted a 3.34 ERA in 207 innings pitched.

With such weak counterparts surrounding them, the Red Sox are right to believe that they can get by with a rotation predicated on eating innings and inducing high ground ball rates. While lack-luster on paper, Boston’s starting five should match up well with the rest of the league, assuming everyone operates around their career norms. On top of that, Boston can also hang their hat on the belief that the mid-20 year old’s they’ve acquired this offseason are on the cusp of reaching their prime years.

Should the Red Sox reach the trade deadline in pole position of the division, or within striking distance, Boston could then add a rental ace for their playoff run. Assuming some clubs fall off the table this summer, the trade market should be flush with rental options. Johnny Cueto, Jordan Zimmerman, David Price, and Hisashi Iwakuma are all set to hit the open market in 2016 and could be available if their respective teams find themselves out of contention. Moreover, if the Red Sox refuse to meet the typically high demands held on starters at the deadline, they can always elect to wait until the offseason to add an ace without sacrificing minor league talent.

Right now, it’s best for the Red Sox to roll with what they have in the rotation. Sure, they could add Scherzer, Hamels, or Shields with a phone call and a swipe of a pen, but they shouldn’t sign a player just to say that they have an ace. Instead, the team can afford to wait out the market, let the season play out, and get their guy. Whether it comes via trade or free agency, it’s better for Boston to obtain the player they want, rather than being pressured into signing a pitcher they don’t.

Carl Yastrzemski walked 452 more times than he struck out in his 23-year career.