The “Prospects To Know” series continues with the Red Sox top right-handed pitching prospects, a group headed by two righties who made their major league debuts last season.

After a stellar ending to his 2013 season, shoulder soreness limited Barnes during spring training in 2014. This kept him from competing for a spot on the big league club in April, and he struggled to get things going in Pawtucket. The 2011 first round pick finally strung together some solid outings in August, going 3-1 with a 2.16 ERA while striking out 38 batters in 42 innings pitched. He finished off his year in the majors with a brief stint in the Red Sox bullpen. 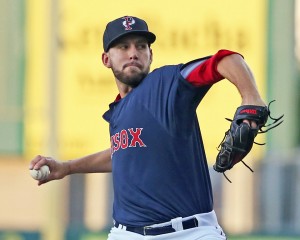 Barnes relies heavily on his fastball that sits in the mid 90’s. His offspeed pitches still need some refinement, and with the rotation depth the Red Sox acquired this offseason he’ll likely start the year back at Triple A Pawtucket. He could join the major league squad either as a spot starter or bullpen help depending on what the club needs.

For the 2nd consecutive year, Ranaudo put together an impressive minor league campaign. He went 14-4 for Pawtucket, with a 2.61 ERA and 1.20 WHIP. After a call-up to Boston, his results were more of a mixed bag. He had some good starts, but struggled to put big league hitters away. 2015 should give a good read on what Ranaudo’s role will be in the big leagues. He still has potential as a back end starter, but could also move to the bullpen full time.

Boston acquired Hembree along with Edwin Escobar in the trade of Jake Peavy. He’s strictly a reliever, and the hard thrower should feature in the Red Sox bullpen in 2015. The righty had 20 saves between his two clubs in 2014, with 55 strikeouts in 46 innings pitched. His fastball/slider combo could lead to a late inning relief role with Boston.

Stankiewicz was Boston’s second round pick in the 2013 draft. He spent his first full season with the Low A Greenville Drive, posting a 11-8 record with a 3.72 ERA and 1.21 WHIP. He has an ideal pitchers frame and features a fastball that sits in the low 90’s. With a full season of professional baseball under his belt, I’m expecting a big season from Stankiewicz in 2015.

The Red Sox gained an extra pick in the 2014 amateur draft when Jacoby Ellsbury signed with the Yankees, and they used it to select Kopech, a high school righthander from Texas. He showed a terrific mid 90’s fastball and excellent breaking ball during his senior year. Reports out of the Red Sox fall instructs were that Kopech was one of the most impressive pitchers in camp. If he continues to impress, he could earn a full season assignment to Greenville in 2015.

The Red Sox selected Cosart, whose brother Jarred pitches for the Miami Marlins, in the 3rd round of the 2014 draft. He started his college career as an outfielder, but decided to move to pitching after one season. He showed so much potential on the mound that he was drafted by the Sox after one year as a pitcher. His strengths are a powerful fastball and great athleticism, but with so little pitching experience he will likely move slowly in the Red Sox system.