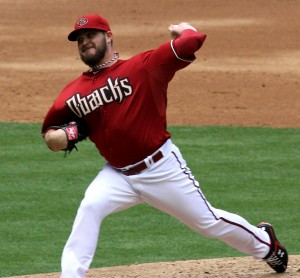 Ever since the Red Sox acquired Rick Porcello, Wade Miley, and Justin Masterson this offseason, general manager Ben Cherington has down played the team’s desire to acquire an ace. With high price tags on both the trade and free agent market’s, Boston pushed all of their chips to the center of the table on a handful of middle of the rotation arms.

But that was before Max Scherzer decided to sign a mammoth 7-year deal with the already pitching heavy Washington Nationals this weekend. With the former Cy Young Award winner in the fold, the conversation quickly turned trade speculation regarding the teams glut of starters. Early conjecture from FoxSports.com’s Jon Morosi featured free agent to be Jordan Zimmermann on the trade block, while MLB Network’s Joel Sherman wondered if Washington would keep their rotation as-is.

While Zimmermann has undoubtedly been on the Red Sox radar this offseason, he seems hell bent on reaching free agency in 2016, which will probably deter Ben Cherington from paying through the nose for the 28-year old via trade. Similarly, right-hander Doug Fister would require Boston to part with something of great value, despite being a year away from free agency. Gio Gonzalez, whom the Red Sox were finalists for when the Oakland A’s were shopping him in 2011, has the numbers and contract control to warrant a large haul also.

Whether it’s Zimmermann or Fister, any trade with Washington for a starter is going to require a sweet package, so why not “go big or go home” and strike a deal for Stephen Strasburg.

All offseason Cherington has been looking for the one perfect ace to plant atop of his rotation, and the 26-year old right-hander checks off all the boxes. Since successfully recovering from Tommy John surgery back in 2012, the former first round pick has amassed a 3.10 ERA over 557.1 innings pitched. On average, Strasburg managed to collect over 230 strikeouts a season, and last year managed a league leading and career best 242 punchouts. Unlike Zimmermann and Fister, Strasburg is under contract for two more seasons via salary arbitration.

With Chris Sale as an offseason long pipe dream, Ruben Amaro Jr. holding Cole Hamels for ransom, and James Shields in the market for a huge payday, Strasburg is the ace that Ben Cherington has been looking for all along. Young, in his prime, and under control; the three things that the third year GM values most regarding starting pitching. While any trade for Strasburg would require Boston to open up their cabinet of prospects and say “take your pick”, talent like Strasburg doesn’t become available often. Meeting Washington’s demands would hurt, but the Red Sox could quickly move on if it meant landing Stephen Strasburg.