How do the projection systems view the 2015 Red Sox?

Given all the snow currently blanketing the northeast, Red Sox fans could be forgiven for believing that baseball season remains far off in the distant future. But those hopeful first days of spring training are moving ever closer, with pitchers and catchers scheduled to arrive in Fort Myers in less than a month to begin preparing for next season.

Barring any surprise moves, then, (James Shields is still out there) Boston’s roster is nearly set for the beginning of the 2015 campaign. Some might see this as a worrying reality given the club’s supposed need for a frontline starting pitcher. Nevertheless, the Red Sox have done a pretty good job this winter re-boosting a flailing offense and adding depth to the pitching staff without surrendering much in the way of young talent.

That outlook is confirmed by the various projection systems out there on the Internet, which have some good things to say about Boston’s chances in 2015. Back in December, I wrote about how the Red Sox stack up with their AL East competitors, and little has changed since then. The Red Sox are projected to be the deepest and best team in the division, although the rest of the AL East will be snapping at their heals. 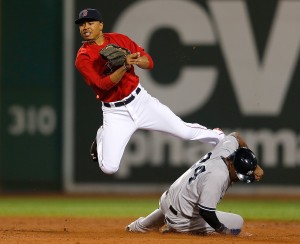 With FanGraphs releasing their ZIPS projections for Boston on Monday, I thought it’d be a good time to see how the various projection systems view the Red Sox in 2015. What can we expect out of exciting youngsters Mookie Betts and Xander Bogaerts? How will Rusney Castillo fare in his first big league season? Did Ben Cherington do enough in rebuilding Boston’s rotation?

In other words, what insights about the Red Sox can we glean from these forecasts? As a reminder, projection systems use a player’s past performance, age, ballpark and player comps to estimate how well a player will perform in the future. They’re obviously not fully accurate, but they do a good job of estimating a player’s true talent level and any potential variances in performance.

First off, ZIPS is bullish on Boston’s rotation, even though many still believe the team needs to add another starter. Rick Porcello is projected for 3.5 WAR (which would be a career-high), a 109 ERA+ and 3.59 FIP. The other newcomer in the Red Sox rotation, Wade Miley, isn’t far behind him, with ZIPS foreseeing 3.1 WAR, a 104 ERA+ and 3.82 FIP from the left-hander. It’s safe to say Boston’s brass would be pleased if Porcello and Miley performed so well in their first seasons with the club, even if Steamer isn’t quite so optimistic.

Beyond that, the projections expect roughly league average seasons from Clay Buchholz, Justin Masterson and Joe Kelly. Another interesting note is ZIPS’ forecasts of the club’s younger pitchers, with Henry Owens and Eduardo Rodriguez expected to hold their own if given the opportunity in the majors. The projections provide a good reminder that even if the Red Sox lack a top-of-the-rotation pitcher, they have plenty of quality depth with the likes of Owens, Rodriguez and Matt Barnes.

From a Red Sox perspective, the most exciting part of the ZIPS projections might just be its forecast of Mookie Betts. The 22-year-old is expected to bat .266/.336/.408 and compile 3.1 WAR. Steamer foresees an even better offensive output from Betts. The most exciting part? Betts’ No. 1 comparable player, according to ZIPS, is Andrew McCutchen. To be clear, this doesn’t mean Betts will be nearly as good as McCutchen, but rather that the youngster has a similar profile at this point in his career.

ZIPS sees some improvement from Xander Bogaerts, expecting him to be an above-average offensive shortstop, though a little below average defensively. It’s important to remember that Bogaerts is still just 22 years old. Newcomers Hanley Ramirez and Pablo Sandoval are both projected to bring exactly what they were signed for: strong offensive performance with a little bit of power.

Beyond that, we also finally get an optimistic projection on Rusney Castillo. Considering his lack of experience stateside, it’s tough to get a read on Castillo (Steamer forecasts him to be a league-average player). ZIPS thinks the Cuban will be about average offensively and contribute well defensively in center field, making him a roughly 2.5-win player.

Overall, what the projection systems indicate is the amount of quality depth the Red Sox have compiled. The arrivals of Ramirez and Sandoval will help bring some stability to the club’s offense, which should also benefit from Betts being around for a full year, some improvement from Bogaerts and better health for Dustin Pedroia, who is projected to be the team’s leader in WAR.

Questions remain, of course. Injuries can never be predicted, and the rotation will still have plenty to prove, even if depth is less of a problem. Ultimately, the Red Sox are in a good position to get back to where they want to be—the top of the AL East in October. Considering how many moves they’ve made since the trade deadline, Cherington has done a remarkable job rebuilding the roster on the fly.