The Red Sox, Grounders, and You 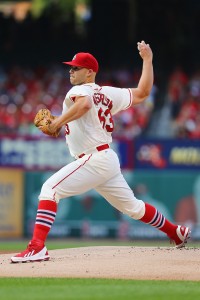 Masterson will be a part of Boston’s wormburner brigade.

The first thing you probably said when you looked at the starting rotation of the 2015 Red Sox this morning probably wasn’t “yeah, this’ll work”. Knowing you, it was probably something like “eh”, “meh”, or a statement – when processed through Google SafeSearch – that’s something like “what the freak is this stick”. It’s not all that pretty to look at. You know some names, but you also know they won’t blow you away.

It’s not without optimism, though. Dan Szymborski’s ZiPS projections have both Rick Porcello and Wade Miley racking up at least three fWAR each, and the other three starters getting roughly two wins each as well. It’s a start, even if most will think that’s just putting lipstick on a pig. None of these guys are particularly old, either – Clay Buchholz and Justin Masterson are the oldest at 30. There is some cause for joy.

One particular aspect about this group is that they are masters at inducing groundballs, and that’ll alleviate the lack of strikeouts. While this is a solid strategy, no plan survives contact with the enemy. The success of wormburner pitching staffs has been iffy, and it’s not a topic you often hear after a team wins the World Series. The top teams in getting grounders over the last two years are all over the map in terms of success. We’ll use SIERA instead of FIP here, as it’s more forgiving towards groundball pitchers while staying a great ERA indicator.

The teams we see here are a mixed bag. We have the Dodgers, who run out the best pitcher in the game every 5 days, and then we have the Rockies, who are doing well in terms of getting grounders, but are completely awful at anything else involving throwing a ball hard from 60.5 feet. So getting grounders is not an automatic ticket to the World Series Club. The 2013 Red Sox were 23rd in groundball rate at 42.9%, while the 2014 Giants’ 45.9% mark was 10th.

However, don’t assume that basing your staff around getting the grounder isn’t a terrible idea at all. Most of these teams improved and some even found success on the way up. The Pirates broke their playoff drought. The Cardinals beat said Pirates in 2013 and were bounced by the current champions in 2014. The Indians were just beaten out by a ridiculously hot Royals team after riding Corey Kluber and a bunch of young pitchers into contention. Half of these teams made the playoffs, if you want an arbitrarily inspiring statement.

The thing with grounders, however, is that while you can get people to hit them, there’s got to be guys who can field them. You can induce a groundball 100 percent of the time, but if the other eight guys on the field have the collective fielding skill of Vladimir Guerrero, then you’re not going to get outs. So how did these teams do in the field? 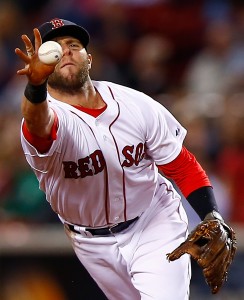 Dustin Pedroia might not hit like he used to, but his glove is as gold as ever at the keystone. Don’t expect any less this year, but a few more diving stabs wouldn’t hurt.

According to Fangraphs’ Def metric, the D-Backs were outstanding in 2013, boasting the best defense in the majors. The Dodgers were 6th, the Pirates 8th, and the Rockies and Cardinals finished 14th and 20th, respectively. 2014’s teams showed far less skill with the glove. The Marlins were the best at 13th overall, but the Indians were by far the worst at 29th, making their 85-77 record seem much more amazing. The defensive ratings for these teams are all over the place.

So what does this mean for the Red Sox?

It means that the Red Sox see their position players as the best possible combination of offense and defense they can get. The 2015 offense is projected to be one of the best in the American League, if not the majors. There will be fireworks.

And the defense? Dustin Pedroia has always graded out as a great defender. Christian Vazquez‘s glovework has been raved about by scouts and players. Everyone except Hanley Ramirez and Xander Bogaerts are seen as good or better fielders at their positions. There will be web gems.

On both sides of the ball, the Red Sox position players are great. While a heavy groundball diet isn’t exactly a indicator for postseason success, it’s looking more and more likely that those grounders will be hit towards capable fielders. That doesn’t mean the Sox should stop looking around for a top-flight starter. The rotation can always improve, especially if it involves acquiring a guy with a penchant for tons of strikeouts and weak contact.

As it is, the rotation is decent at best and a work in progress at worst. Saying they’ll get tons of grounders to make up for the lack of strikeouts or skill isn’t a proven thing. Relative to the team, the Red Sox rotation is a weakness, no doubt. Compared to the league, however, it’s not so bad. Having a bunch of starting pitchers play to your strengths is a pretty good bad thing, as far as weaknesses go. Just don’t think those pitchers can be the equivalent of pitchers who are actually & currently great. Grounders are awesome, but greatness is far better.