Consistency isn’t a word I would use to describe the Red Sox over the past few years, and although the club is but one season removed from a World Series title, the Red Sox enter 2015 with more to prove than that might normally suggest. A successful October is always worth cherishing, but when it comes sandwiched between two last-place seasons, the natives in Boston still tend to grow restless. Recent memory provides proof of how everything can come together all at once, and also the opposite—how injuries, underperformance and overly optimistic expectations can torpedo a season.

If there is one lesson to learn from Boston’s erratic performances the past few years, it’s how vital depth is in Major League Baseball. The 2013 Red Sox were notable for all the contributions they received up and down the roster during their championship run. Nearly everyone, from the club’s stars down to the last man on the bench (remember Mike Carp?), contributed at one time or another. 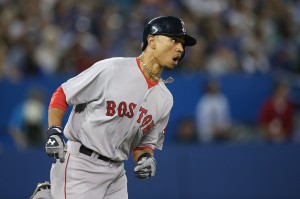 Boston’s last-place teams in 2012 and 2014 stand out for the opposite reason: They lacked the depth (partially due to injury, partially roster construction) that so buoyed the 2013 squad’s success. When Jackie Bradley and Xander Bogaerts struggled last season, the Red Sox had few alternatives to turn to. Grady Sizemore proved a bad gamble, and although Ben Cherington had good intentions when he re-signed Stephen Drew, that move didn’t pay off either. Besides Brock Holt, the Red Sox received little to no contributions from their role players, forcing them to stick with the likes of Bradley and Bogaerts.

Oakland’s continued success the past few seasons (along with clubs like Washington, Baltimore and Pittsburgh) has underscored the importance of depth. The A’s won three straight AL West titles not through star power, but rather Billy Beane’s ability to add quality to the bottom of Oakland’s roster, to avoid the type of positional black holes that can sink even the richest and most talented clubs. The Dodgers didn’t fall short last October because Clayton Kershaw and Yasel Puig underperformed; they lost because they lacked depth in crucial areas on their roster. It’s little wonder the organization’s new regime has gone about fixing these issues this offseason rather than make any big splashes.

This reality is a reason why Red Sox fans should be optimistic about the team’s chances in 2015. Cherington’s numerous moves since last July’s trade deadline have left Boston with notable depth and plenty of options to turn to if injuries strike during the season. Spring training hasn’t even officially begun, but early signs indicate the Red Sox have one of MLB’s most talented rosters from top to bottom.

Back in January, for instance, FanGraphs’ Jeff Sullivan tried to measure team-wide depth by using Steamer’s 2015 projections and adding up all the players who were expected to compile at least one win. He then sorted all those players by team and gave the reader this graphic, which demonstrates just how many quality performers the Red Sox could have: 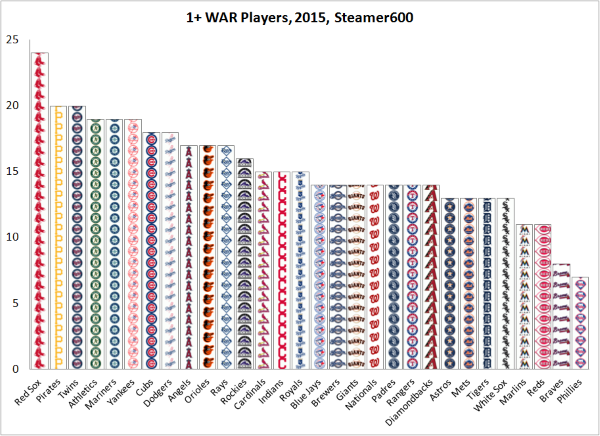 The Red Sox are projected to have 24 players that contribute at least one win, which is quite a bit more than any other team in baseball. Now, this analysis shouldn’t be taken as a guarantee that the Red Sox will excel in 2015, but it does serve as a solid proxy for how much talent each club has. Boston should expect to get contributions from any number of players on the roster.

Glancing back to 2014, the Red Sox had just 14 players (seven hitters and seven pitchers) accrue one win, three of which were dealt at the deadline. Beyond a few players, the team’s offense lacked any kind of firepower, something newcomers Pablo Sandoval and Hanley Ramirez should help rectify.

In 2013 by comparison, the Red Sox had 19 players (11 batters and eight pitchers) compile one win and 11 of them reached the three-win plateau. That widespread production was sorely lacking a year later when Boston slumped back to last place.

All this depth doesn’t mean the Red Sox are assured of returning to the playoffs this season. The pitching staff is still a potential worry, and good health is needed for any successful team. In addition, Bogaerts, Betts and fellow youngster Christian Vazquez, along with Rusney Castillo, all have limited experience at the big league level.

Still, it’s clear the Red Sox are far better prepared to handle the unexpected consequences of a long season this time around. Their offense will be vastly improved from 2014, and bench players such as Holt, Daniel Nava and Allen Craig (not to mention Shane Victorino) should help fill in any gaps that appear. Depth can be a huge asset in the competitive environment of the AL, and the 2015 Red Sox look primed to capitalize on that fact.