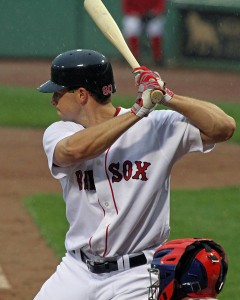 While most of the Red Sox roster looks to be in order, there are still some questions that will need to be addressed as spring training gets underway.

Perhaps the most interesting conundrum facing the team right now is their outfield depth. While Hanley Ramirez is a lock in left field, center and right are far less of a sure thing. It’s the assumption that Boston will field 27-year old Rusney Castillo in center field, after the team spotted him a 7-year, $72.5 million deal in August of last year.

This means that right field will come four legitimate MLB contributors, with the odd man out being delegated to the bench, while the others are either traded or sent to the minors.

For the starting job in right, the conversation seems to pivot between Mookie Betts and Shane Victorino. While most assume that Betts’ 2014 season earned him the job over the injured Victorino, John Farrell gave wasn’t about to shift the depth chart accordingly. Barring any injuries or under performance this would mean that Betts would start the year in triple-A, and Victorino would assume his position in right.

Subsequently, Boston would need to decide between Allen Craig and Daniel Nava for the final bench spot. When healthy Craig can be a monster producer, and plays first base and the corner outfield spots. As a member of the St. Louis Cardinals, Craig batted over .300 from 2011-2013 and collected 90-plus RBI’s in that time. While a foot injury hampered his 2014 season, and in turn shipped him out of St. Louis, the 30-year old enjoyed a full offseason of recuperation and will be ready to go for Boston.

Nava, on the other hand, is a similar player in some ways. Like Craig, Nava can play both corner outfield spots as well as first base, and is 30 years of age. Nava, however, presents a left-handed bat that could be more useful off the bench. All three of Boston’s outfielders are right-handed hitters (Shane Victorino is technically a switch-hitter, but started batting exclusively right-handed in 2013), meaning Nava’s lefty stick could provide contrast when necessary. While Nava’s career numbers don’t boast the same high RBI totals as Craig, the California native does boast a .362 career on-base percentage.

The Red Sox will likely use spring training as an assessment period before they make any radical moves. The good thing about the Sox roster is that there is a lot of depth, meaning that an injury can quickly be patched up. For the outfield, this means that Boston will hang onto all of their cards until late spring training, when they will have a fuller understanding of where the outfielders fit. In the meantime, Boston can use the spring as a platform to showcase a healthy Allen Craig, Shane Victorino, or whoever else they feel inclined to deal in order to accommodate the allotted 25 player requirement.