Super Bowl Wizardry and the Rest 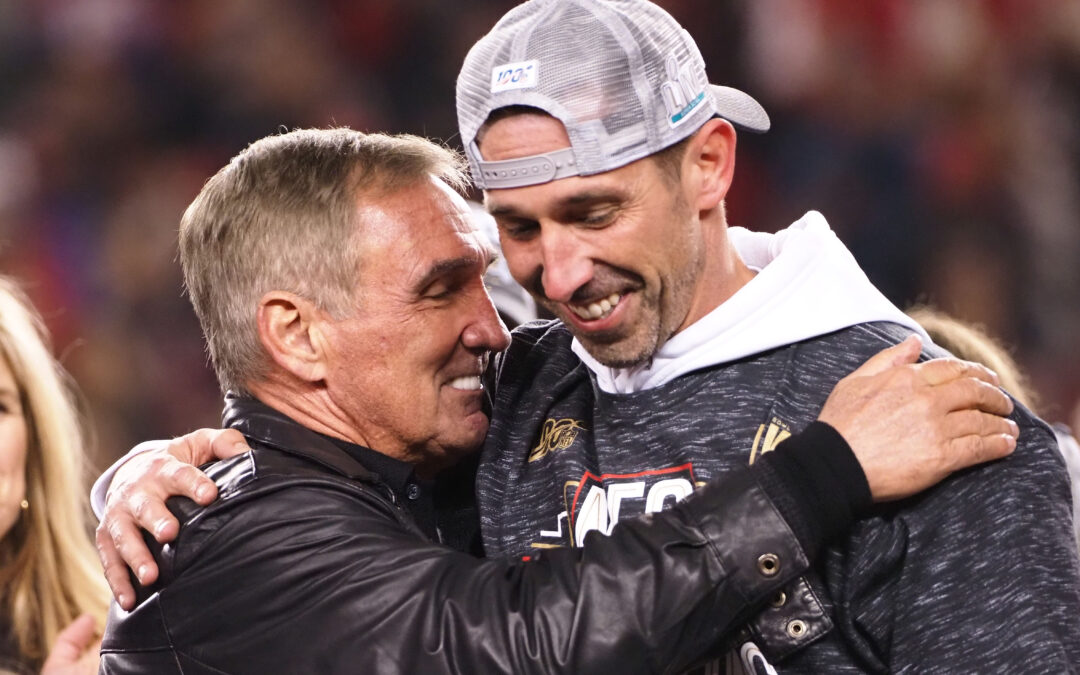 49ers head coach Kyle Shanahan looked like Nostradamus during the NFC title game against the Packers on Sunday.

New video has surfaced, showing Shanahan having a conversation with a referee on the sideline. In it, he’s heard telling the official what route tight end George Kittle was running, and how a Packers defensive back would interfere with him on the route.

Not only that, he actually predicted exactly where Kittle would be interfered with — before the ball was even snapped. Wish we had this guy with us when visiting www.sportsbetting24.ca this weekend. Sure enough, Kittle was grabbed, and defensive pass interference was called.

Serious Jedi Mind Tricks by Shanny there. Come on Kyle, join us in a game of sports betting or on casino en linea colombia, even if it’s not on the Super Bowl. Just, WOW.

The Best Farewell You’ve Ever Seen

Eli Manning is apparently hanging up his NFL cleats, with an official announcement coming Friday, and the football world paid tribute to one of the better quarterbacks of the past decade.

It was the end of an era, as the 39-year-old quarterback had started every season for the Giants since entering the league in 2004. He won two Super Bowls during that time, most notably helping to take down the previously 18-0 Patriots — spoiling their hopes of an undefeated season.

Manning has a charismatic personality, and an underrated sense of humor, appearing on “Saturday Night Live” in the past. As such, the Giants released a tribute video featuring some of his funniest moments, and it’s pretty great..

The Future of Cook

Vikings running back Dalvin Cook had his breakout season in 2019, as at one point, he was actually leading the league in rushing.

Cook racked up 1,135 yards and 13 touchdowns in just 14 games, showing just how effective he can be when healthy. He thrived in former offensive coordinator Kevin Stefanski’s offense, helping set up quarterback Kirk Cousins with some easy throws on play-action, which the team benefited from greatly.

He’s the straw the stirs the drink for the Vikings offense, and will continue to be going forward. It’s hard to see him slowing down in 2020, either, as he’ll be entering the final year of his rookie contract.

But Cook and Vikings may get a deal done before he even plays a game next season, and the star running back appears to want to remain with the team.

“I love the organization. They took a chance on me in bringing me in,” Cook said, via Nick Shook of NFL.com. “If a person believes in me, I’ll give them my all. I try to do everything, give them my all and I’m just happy that I’m at the Vikings. It’s a great organization. I think everything we’ve got going on is for the future.”

He also put his 2019 campaign in perspective.

“It was a good season,” Cook said of the 2019 campaign. “Obviously it wasn’t the ending that we wanted but I think it’s a lot we could get accomplished and that playoff game (Minnesota’s wild-card win over New Orleans) is a game we can remember and piggy-back off of it.”

Cook’s saying all the right things, and we expect his contract to be done before September rolls around.

Chiefs head coach Andy Reid is headed to the Super Bowl for the second time, and that’s caused one of his former quarterbacks to talk about when he was last there in 2005.

The Eagles squared off against the Patriots in Super Bowl XXXIX, and ended up losing, 24-21. The game could’ve gone either way, and Eagles former quarterback Donovan McNabb is essentially trying to pin the loss on Hall of Fame wide receiver Terrell Owens, for being a bit distracted, rather than being focused on the game.

Owens, to his credit, was coming back from a fractured fibula, yet still managed to haul in nine catches for 122 yards in the game, which certainly aren’t paltry numbers. Yet, for some reason, McNabb had this to say about him.

“The lead in to the following year I’m thinking he’ll be back healthy, you know? We had Free, we had guys that were just elevating their game, gaining experience, we’re going to be back,” he said. “So, the off season goes through and all of the sudden there’s turmoil here there are conversations going back and forth and we had to answer those questions instead of focusing on what we need to do in order to get back to where we were and I thought that was the major distraction for us.”

McNabb had this to say:

“I’m just sitting there, I’m watching on TV and Brian Dawkins and Trotter were my roommates,” he said. “And Dawk comes in and he’s like ‘What did he do now?’ and I’m like ‘Take a look.’ Like, this is like Days of Our Lives. Like, it’s unbelievable, you know. That was something that kind of broke us up. That was the most frustrating thing for me.”

That’s bush league by McNabb, throwing a former teammate under the bus.