Buchholz and the Long Ball 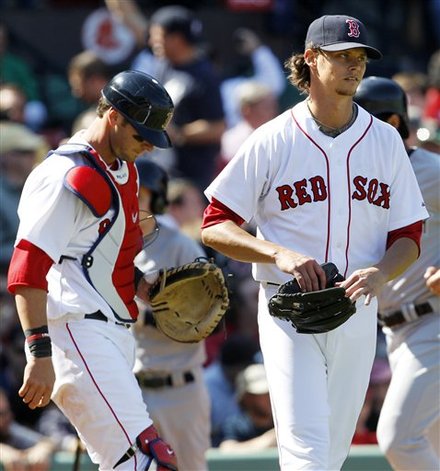 Coming in to 2011, we heard from every pundit with a sabermetric calculator that Clay Buchholz would experience some significant regression this season. In 2010, his ERA well outperformed his xERA and the LOB% and hit rates were were unsustainable. Additionally, Buchholz’ HR/9 was so low that we all sort of knew that it was going to jump upwards in ’11.

It was no secret to any of us.

But what no one could have predicted was Buchholz getting pounded for home runs so early and often. Five home runs in two starts? Now granted, he has faced two super-slugging teams in the Texas Rangers and New York Yankees.

But five home runs? Buchholz gave up just nine all of last season.

READ MORE AFTER THE JUMP

DAVID MURPHY
In the start against Texas, old ‘friend’ David Murphy (stupid Eric Gagne trade) took the second pitch he saw from Buchholz and delivered it into the right-field seats for a home run. It was a 375-foot flyball that Buchhloz threw right into the left-handed hitter’s wheelhouse.

IAN KINSLER
One inning later, Buchholz faced the red-hot Ian Kinsler who had already smashed two leadoff homeruns in the series. Buchholz got ahead of him 0-1 with a first pitch four-seamer and then moved exclusively to the slider.

Buchholz was trying to stay on the edges with Kinsler and missed with back-to-back sliders to run the count to 2-1. The fourth pitch of the AB was a called strike on a slider and that’s when the mistake was made.

I’m not sure if it was a los of grip but the fifth pitch in the AB was only 80 MPH after the previous four pitches touched between 91-94 MPH.

Kinsler creamed the meatball slider 394 feet for his third home run in as many days. HOME RUN #2

MIKE NAPOLI
In the 5th inning, Buchholz game up his third home run. This time it was to Mike Napoli on a full count. Buchholz had shown Napoli a full repertoire of pitches in the AB.

He started Napoli off with a fastball for a called strike and went away on the next pitch with a curve ball that was about two feet out of the zone. Napoli did not offer and with the count at 1-1, Buchholz threw Napoli that was called a strike (borderline).

Then came the mistake. On the 8th pitch of the AB, Buchholz grooved a 93 MPH fastball down the middle of the plate, upper third and Napoli crushed it 421 feet to left-center. HOME RUN #3

NELSON CRUZ
Finally, in what ended up being the last batter that Buchholz faced in Arlington, Nelson Cruz decided to punish the young Red Sox pitcher with just one more smash of a home run.

After starting Cruz off with two offspeed pitches, Buchholz tried to whip a fastball by him but instead grooved it. Cruz responded by sending the ball 447 feet and Buchholz to the showers.

First pitch was a curveball on the edge away from Cruz for a called strike. The second pitch was another curve ball hoping that Cruz would chase 1.5 feet outside, but he did not.

Then the fastball down broadway and into the sky. HOME RUN #4

Against the Yankees Buchholz did not pitch as well as he did against the Rangers. He gave a lot of extra base hits including this three-run homer that gave the Yankees a commanding 5-1 lead in the 4th inning.

The home run hooked down the left field line and smacked off the Green Monster seats. Hit Tracker Online measure its true distance at 353 feet.

The first pitch Buchholz threw to Russell (J.?) Martin was a high fastbal called for a strike. The second pitch was a curve ball about 2 feet outside (seeing a trend here from Buchholz). The third pitch was another curveball. And again, it was right down the middle of the plate. HOME RUN #5

So what do we make of all this?

Buchholz is a ground ball pitcher who should continue to hover around a 1.0 HR/9. Historically, he has flirted with HR/9’s of 1.3 and last year was at 0.5 HR/9.

Currently, Buchholz’ HR/9 is 4.5. That will stabilize and he should revert to his ground ball ways provided that he stops making mistakes that turn into HRs. Last season those balls stayed in the park.

Like the home run to Nelson Cruz in Texas, last year’s good fortune is long gone for Buchholz and he will have to fight off the swing of misfortune that has come his way to start 2011.