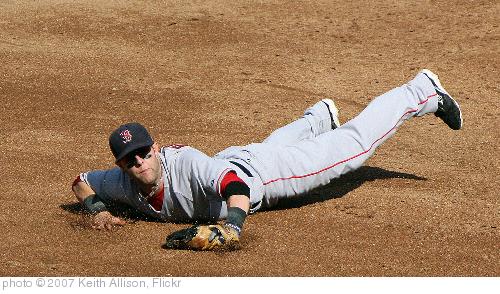 When Terry Francona was released/fired/not re-upped/left on his own accord, the question of the offseason for the Boston Red Sox became, “who will play cribbage with Dustin Pedroia now?”

No word if new Red Sox manager Bobby Valentine likes his 15-2’s or right Jacks, but 2012 will be the first season for Pedroia without Francona.

All joking aside, it was clearly evident that Pedroia and Francona shared a special bond and the departure of his manager hit him particularly hard.

“It’s hard, man, with the way we played this year, but by no means is it Tito’s fault. We get paid a lot of money and the biggest thing that I am upset with, and I think a lot of guys are upset with, is the accountability of each other. It’s not the manager’s fault. We need to hold ourselves more accountable as a team, as players. There are a lot of things that went on that was disrespectful and we played like it. That’s basically it, but Tito’s had every single guy’s back in that clubhouse from Day 1.

“This is tough. He’s had my back, he gave me a chance when I was struggling as a rookie. I was hitting .150 and he stood by me and helped me become the player that I am today. I’ll forever remember that. I’m sure there will be tons of offers for him because of what’s he’s accomplished and what kind of guy and manager he is. He’s going to move and I’ll definitely be following him.

“I wish him the best and I hope he gets a job in the National League for a team that we don’t get a chance to play because it would be like playing against one of my family members. – Dustin Pedroia, ESPN, Red Sox Report

Given the nature of his foot injury in 2010, Pedroia’s outlook for 2011 was muddled at the start of the season. Six hundred at-bats later and the questions that surrounded the former MVP were answered. Pedroia hit .301 with 102 runs scored, 91 RBI and his 2011 included 25-game hitting streak, the most for a Boston Red Sox second baseman. And one of the most impressive aspects of Pedroia’s offense prowess is his EYE. The statistic ‘EYE’ is simply a ratio of walks to strikeouts and the Sox’ second baseman boasts an EYE of 1.01. That means Pedroia walks as many times as he strikeouts. Given that Pedey sees over 730 plate appearances in a season, that is pretty remarkable. He ranked 8th overall in all of MLB in EYE trailing big-time names like Jose Bautista and Miguel Cabrera.

Pedroia can hit but he can also flash the leather. Last season, Pedroia won a Fielding Bible Award as well as a Gold Glove. The Red Sox actually won three Gold Gloves in 2011 marking just the third time the Sox had three Gold Glove winners in a single season. The other two winners last year were Adrian Gonzalez and Jacoby Ellsbury.

It wasn’t always great for Pedroia in 2011 though. He struggled for awhile in the beginning of the season and many wondered if his foot was still bothering him. Through the first two months, Pedroia was hitting around .240 and it was supported by an xBA of .229 making the slow start a serious concern for everyone.

Then, it early June, team doctor Tom Gill checked out Pedroia’s knee a tiny camera and found no damage that would require surgery. Red Sox Nation breathed a sigh of relief. Dr. Gill oiled up Pedroia’s knee joint Tin Man-style and Pedroia would return to the lineup where he began to rip the cover off the ball. By the end of June, Pedroia was in the middle of his 25-game hit streak.

ESPN's TruMedia heat map says you would be smart to not pitch Dustin Pedroia up and in.

2012 will probably be more of the same for ‘The Laser Show’. Pedroia’s profile is very stable and his excellent plate discipline is where it all starts. He’s a rare player who makes great contact (87%) and can hit for power (21 HRs, 37 doubles). And don’t sleep on his base-stealing abilities. In 2011, Pedroia’s above-average speed and a 15% stolen base opportunity (# of times he got the green light) lead to a career-high 26 stolen bases for the second baseman.

Next year, it’s safe to bet on another similar showing.