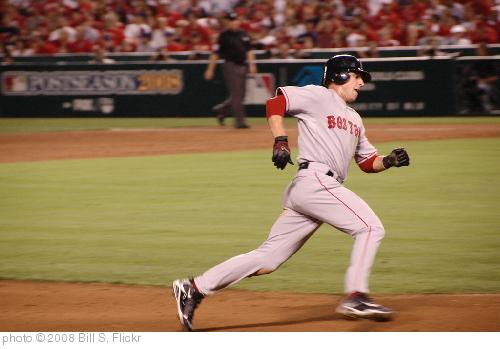 In what became a popular Twitter meme where unicorns drink the blood of Lowrie, fans across the globe submitted their commentary into a repository that was mentioned repeatedly by blogs, radio shows and newspapers. Lowrie went from disappointment to demi-god status in Boston.

Unfortunately, some months later the Legend was all but dead. For a two-week stretch during an April where the Boston Red Sox struggled mightily to find their footing, Lowrie put on an epic performance spurring the afore-referenced website that treated him like the new Chuck Norris.

Lowrie in April was unconscious. Everything he hit was either smashed or had eyes. It was the coming out party that a lot of us had been waiting for after he struggled with multiple injuries, mono, etc in previous years. In fact, on Patriots’ Day in Boston, while we were all skipping work and drinking frosty adult beverages, the Red Sox middle infielder carried the Red Sox to an easy 9-1 victory over the Blue Jays, collecting four hits (including a homer) and four RBI. It was a pretty awesome display and suddenly it was looking like Marco Scutaro was out of job. In the first month of the season, Lowrie hit .368 with an OPS of .954.

Oh but one month a season does not make. By the end of 2011, Lowrie was hitting just .252 with a paltry .685 OPS. Yikes. Talk about a precipitous fall from grace. And his defense was really causing a lot of his detractors to come back around and throw their hands in the air in disgust. Earlier this season, when he was terrorizing opposing pitchers, it was easy to overlook his mishandlings at shortstop. But as his bat cooled off and the errors continued, it was hard to imagine him keeping the job long-term. Suddenly, Scutaro was back in business.

At some point in June, Lowrie hit the disabled list with a bum shoulder and fell out of the mix at shortstop. Just two months earlier, he looked like the offensive weapon the Red Sox had lacked at shortstop since Nomar Garciaparra was traded. Now, he was back to Mr. Super Utility and battling yet another malady.

A lot of people really like Lowrie. I always had really high hopes for him and defended him staunchly to friends who repeatedly expressed their disdain for him. But at this point, I really think Lowrie is a nice piece to the puzzle for the Red Sox, but I do not think he is a solution at shortstop. If there wasn’t a guy named Dustin Pedroia who had second base on lock down at Fenway, then maybe there could be a role for Lowrie there. But as we sit on the heels of the Winter Meetings (though they are held in the Fall), I wouldn’t be surprised to see Lowrie dealt before Christmas.

According to Nick Cafardo of the Boston Globe, “a few teams” are asking about Lowrie. Ian Browne from MLB.com fielded a question from a reader about Lowrie’s ability to stay healthy/productive and what trade value he might have. Here is what Ian had to say:

Lowrie reminds me of another Sox middle-corner infielder from the 1990s who had pop in his bat but a hard time staying on the field. His name was Tim Naehring, and he never did quite get over all the injuries. Hopefully for Lowrie’s sake, his situation will turn out differently. Despite his durability issues, I think there is a market for Lowrie, because he is still highly affordable and obviously has versatility and is a big weapon from the right side of the plate. The fact that the Red Sox have a similar player in Mike Aviles could make them more willing to deal Lowrie than in years past.

Tim Naehring is an interesting comparison that I had not thought of. One of my biggest concerns with Lowrie is his penchant for hitting flyballs. He hits about 50% of balls in the air and that’s fine and all if you are Mark Reynolds or Carlos Quentin, but when you’re Lowrie it’s not a great formula. Lowrie struggled with the should injury and that certainly impacts his home run-to-flyball rate, but even in a healthy stretch, Lowrie is still only going to hit 10 percent of his flyballs out of the park. That means you are going to fly out A LOT and run yourself into a tidy .240 batting average without about 10 home runs. That’s not a great formula.

Offensively, Lowrie is a blend of skills that most teams would salivate for at a middle infield position. He has above-average power and speed and makes decent enough contact to be a good Major League hitter. One of the great things about the switch-hitting Lowrie is that he can play anywhere in the infield. He’s a super-utility with a potent plate profile. But Lowrie doesn’t want to play that role – he wants to be a starter. That really seemed like the makings of a guy who could be packaged in a deal.

The Oakland A’s, Texas Rangers, San Diego Padres and Kansas City Royals have all been rumored to have interest in Lowrie. Certainly, if you think this is a good buy-low situation, then now is a good time to get in. Depending on who you talk to, in 2011 Lowrie is everything from a 4-win shortstop to an injury-riddled super-utility. If I were dealing for him, I would bet the latter.

So if you are in the market for a post-hype prospect with an intriguing offensive profile, stone hands, his own legendary following, a small-market friendly contract, and more ICD-9 codes than counting stats, then please inquire within. Ben Cherington would like to hear from you.