Ross Is Boss (We Hope), And Where To Go From Here 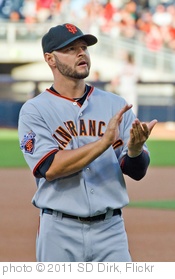 Clearly, the Red Sox anticipate facing the Philadelphia Phillies and Roy Halladay in the 2012 World Series. Why else would they sign veteran outfielder Cody Ross? Because they were in desperate need of an outfielder who could hit left handed pitching? Because they probably weren’t comfortable with Darnell MacDonald being in the opening day lineup? Because there had to be some reason they cleared Marco Scutaro’s contract off the books, right?

There are couple reasons why Cody Ross makes sense for Boston right now. One, they did need someone who could hit lefties, preferably an outfielder. With Ryan Sweeney seemingly slotted to start in right field, General Manager Ben Cherington had been in the hunt for someone to platoon at the position. Sweeney is a career .233 hitter against lefties compared to a .296 average against righties. Comparatively Ross has hit .282 against lefties in his career and .253 against righties. It is worth noting that Ross only hit .234 against lefties last year, but he had a down year in general, batting only .240 overall. It wasn’t due to much bad luck as his BABIP was a pretty neutral .279.

No one really knows when Carl Crawford will be fully recovered from the surgery he had performed on his left wrist six days ago. Ben Cherington’s statement on the surgery should be telling enough. He says, “We’re confident that Carl will be back and playing soon.” Well, that sounds encouraging. It’s his follow up that brings a bit of uncertainty to the table. “We just don’t know when.” OK, so he should be back soon, but maybe not because no one really knows when he’ll be back. Seems to make sense.

With that being said, it was essential for Cherington to secure another outfielder. Without Ross, the projected opening day lineup had either Sweeney or MacDonald in left field with Mike Aviles playing right. But, after the Scutaro trade, Aviles seems in line to be the opening day shortstop, so if he was to play right field, Nick Punto would be the shortstop. And the backup shortstop would have been…well… anyone know if Nick Green is still playing?

For three million dollars, Ross is a solid pick up. The roster is certainly less of a fluid mess than it was yesterday. With Ross, Sweeney, MacDonald, and Aviles all able to start in the outfield, the Sox should be OK without Crawford for at least a bit, and will be very solid in right field once he returns.

With Ross signed, the last few dominoes of the offseason seem ready to fall. Your 2012 Red Sox will probably start an Aviles/Punto platoon at shortstop and a Sweeney/Ross platoon in right field. It could be worse. All offseason the media has commented on how Bobby Valentine is great at managing platoon situations like this, and it seems that Cherington is assembling a roster fit for these abilities. Now we just have to see if the media was right.

It’s not exactly clear how much money Boston has left (probably somewhere between 6-10 million after the Ross deal) , but the general assumption is that they will use these remaining funds to secure a fourth starter. Everyone is pointing fingers towards Roy Oswalt, but the market is suddenly heating up for him. Cincinatti looks to be in the mix, and  no matter what, it’s starting to look like the Sox won’t be getting him for as cheaply as they hoped. I’d be surprised if he signed for less than 8 million dollars, even if it is only a one-year contract.

Even if they lose out on Oswalt, and personally I don’t think he would be as solid as everyone else, (Veteran National League pitchers coming off an injury plagued season don’t have a great history moving to the Al East), the Sox have options. A name being brought up consistently is the White Sox’ Gavin Floyd. With the right trade, he would be a safer option. Matt Garza’s name is still floating around, but I don’t see Boston parting with more top prospects than they already have in the past year. Edwin Jackson is going to require a multi-year deal, and let’s be honest, he’s a decent starting pitcher, but no one is hoping to see him in a Red Sox uniform three years from now.

Ken Rosenthal and Jon Heyman both tweeted tonight after the Ross deal about Boston still searching for a solid starting shortstop option. Mind boggling indeed. If the point of the Scutaro trade was to free up money, why in the world would Cherington go out and spend more money on a new shortstop? Wouldn’t the fact that he traded Scutaro away seem to indicate that he had faith in the shortstop depth of the club (Aviles/Punto)? On top of that, there aren’t many readily available shortstops on the market. Hanley isn’t coming, stop dreaming. This is the rare rumor that has been brought up multiple times with absolutely no potential players mentioned.

At this point, only time will tell. It seems safe to say that within the next week, the 25 man roster will be pretty set. The only item left on the checklist is signing that fourth starter. Cody Ross should be a very solid pickup for the team, especially once Crawford returns (when that will be is a different story). One last note, don’t rule out the Sox not making any big moves for the rest of the offseason, testing out the rotation with Bard, Aceves, Miller, Cook, and company, and if none of those options work out trading for a big name pitcher come July 31st. That may be why they are saving the money. The only hope is that if they go with that experimental route that they won’t be out of the race by the time the deadline rolls around. When’s the last time that sentence was written before a baseball season in Boston?