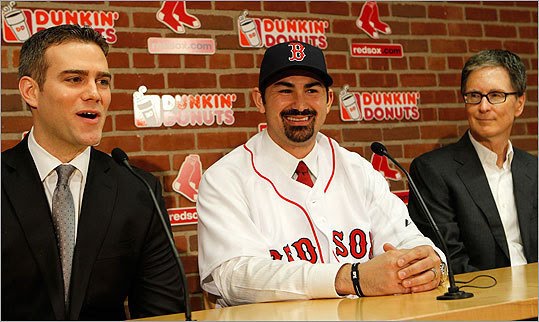 “Wait until we tell them we’re not wearing any pants under this table!”

So today Houghton Mifflin released several excerpts from Terry Francona and Dan Shaughnessy’s new book “Francona: The Red Sox Years” which is due to hit shelves in a few days and my oh my, what a stir it caused.

Things like owners being worried about making money, and ham-fisted insertions of co-author induced narrative shouldn’t be something that’s particularly shocking to anyone – much less a book written by Shank.

Still, in typical Shank fashion, he delved into several recently buried and still-open wounds, pouring acid into each one in hopes of cramming his dirty little pockets with as much money as he can off the suffering of others. Goofy stories, distortions and SHOCK – outrageous speculation could be found throughout many of the quotes, of which we’ll chat about today.

Hopefully, we can debunk some of CHB’s nuttiness, but for the sake of being realistic, this book promises to be his most mountainous, aromatic pile of dung yet. Here are some tasty morsels (corn included) to get your juices pumping for January 22nd~!

One of the more amusing of the released excerpts from Shank’s pile includes a particularly bewildering exchange where then-GM Theo Epstein and Francona were invited to – of all things – a marketing meeting with ownership (Because apparently their insight into digital marketing must be profound).

Over the past few years there’s been some hay made of the Red Sox relentless pursuit of a solution to their sagging television ratings that began to plague the team during their injury-riddled 2010 season. Thus the team contracted out to a consulting firm to the tune of $100,000 in the 2011 offseason with the hopes of finding the answers to that very question. The results showed much of what we already know – guys are guys and most women like sexy men and soap opera aspects of sports.

Apparently, instead of just winning more baseball games, Epstein and Francona (with what I’m sure is some convenient positioning from CHB) claim that ownership wanted them to go out and get sexier players. I don’t mean to be mean, but I’d believe them if that’s what the team actually went out and did.

Instead two of the players they signed that offseason were Adrian Gonzalez and Bobby Jenks.

One was a portly Mexican guy with bushy eyebrows whose good boy demeanor is one click north of Ned Flanders; with the later being an overweight, petulant former closer from Chicago who if one looks close enough – likely has shards of left over candy strewn throughout his Clorox-bleached beard. Nothing screams ‘beefcake’ like those guys.

Never mind the piles of stories waxing poetic over the Red Sox frothy love pursuit of Gonzalez for years leading up to the trade that finally landed him; I guess they just decided that offseason that he was such a sex bomb that they couldn’t wait any longer. It was never about winning baseball games; it was that ladies’ pants everywhere would not allow the Red Sox to keep him off the roster any longer!

And then of course there was Crawford – who John Henry didn’t want to sign – and was lambasted for saying so throughout the Boston Media last year. So much for him. Matt Albers, maybe? Dan Wheeler? Big Sausage Pizza?

I know Francona has some scores to settle. I know Epstein wants to run as far away from his missteps as possible. I know Shank has never seen a cow-patty he didn’t want to roll in.

I also know publishers need to sell books. But c’mon.

One of the more OMG EXPLOSIVE~! excerpts from the book was Francona’s declaration that ownership doesn’t really care about baseball. For fun, here’s part of Gordon Edes’ summary from ESPN:

Francona questioned the depth of the owners’ passion for baseball. Henry’s sporting interests have expanded to include the Liverpool soccer team, the Roush Racing Team, and a marketing deal with basketball star LeBron James.
“They come in with all these ideas about baseball, but I don’t think they love baseball,” he said. “I think they like baseball. It’s revenue, and I know that’s their right and their interest because they’re owners … and they’re good owners. But they don’t love the game. It’s still more of a toy or a hobby for them. It’s not their blood. They’re going to come in and out of baseball. It’s different for me. Baseball is my life.”

First, I was unaware loving the game was part of the job description. I’m sure they’ll take notes from other, oh-so-passionate owners like Jeffery Loria, The Brothers Steinbrenner, Baseball lifer Magic Johnson and the always-present Hiroshi Yamauchi from here on out.

While loving the game certainly isn’t a requirement, this ownership group sure has a funny way of showing that they don’t.

When ownership took over in 2002, the Red Sox were losing money hand over fist, to the tune of over $11 million per year. With upgrades to the stadium, a sweet TV deal, a (mostly) winning team and a brand-revitalizing marketing campaign, the Red Sox currently sock away almost $300 million in revenue each year, while incurring $25 million in operating expenses – good enough for seventh in all of baseball.

Getting to that point took a lot of work. It took spending nearly a billion dollars on their baseball operations department over the past 11 years. It took shelling out $250 million dollars for stadium renovations – much of which came from their own pockets. It came from a relentless branding campaign that granted access to the team and the park (at a cost, mind you) on a level that hadn’t been seen in baseball ever before.

That’s not even getting into the Red Sox Foundation – which in 10 years gave $50 million dollars back to the greater Boston community through a variety of philanthropic initiatives. That’s almost twice the original $30 million estimate given to then-Attorney General Tom Reilly when Henry, Lucchino and Werner took over.

The Red Sox are a sustainable, revenue-generating juggernaut. Ownership doesn’t need to be as present as they were in the past because like any good business owner, they’ve turned their franchise into something that practically runs itself.

That’s a good thing, not a bad thing.

Ownership is involved too much!

By now we should all know that no good Red Sox rip-job is complete without stapling something to the face of the good-ship Lucchino-pop. After all, he’s got a sleazy sounding voice. He has googley eyes. He’s got lots of money us po’ folks don’t. I’m sure he was probably involved in some diabolical Wall Street scam somewhere, right? In a bad economy – a guy like Lucchino is too sweet of a dog not to kick. His nickname is “Lucky” for goodness sakes!

Now a disclaimer here – I’m not a big fan of his on any level, really. Where there’s tons of smoke, there’s usually fire and Lucchino has a history of not getting along with a variety of people, so I’m not discounting Francona’s claims about him being a paranoid d-bag, but accounts of ownership being too involved directly contradicts the fact that they could care less.

That narrative wafted into the air with an even greater effect at the beginning of Ben Cherington’s time in the GM chair – a period of time where everyone and their mother wondered whether the newly minted Sox boss had any power at all. As soon as Bobby Valentine was hired, things hit a fever pitch; with people claiming that Lucchino was overstepping his boundaries and making Cherington look incompetent.

The reality is that you’d be hard-pressed to find a 1st year GM in the history of Major League Baseball that was given a totally blank checkbook and carte blanche to do whatever he wanted with the roster.

Second, ownership plays a role in nearly every investment a 1st year GM makes and that relationship doesn’t change all that much as time goes on. If people are seriously dumb enough to think that Theo Epstein was sitting on a wad of cash in the 2011 offseason to shell out at will to Carl Crawford and Adrian Gonzalez, then they’re beyond help at this point. Ownership was heavily engaged then – as they should have been. Giving more money to two players than you spent on renovating your entire stadium is something owners would kind of like to know about. This is how a businesses that are run by adults work; especially when you’re dealing with the kind of money that could grandstand as the GDP of some small countries.

If you want to, you can paint a picture of Lucchino meddling in any deal that you don’t approve of. It’s really easy. After all, he’s to blame for signing Lackey, right?

Henry and Liverpool sitting in a TREE~!

Folks who’ve previewed the book repeatedly bring this up and I’m flat-out convinced at this point that it’s just Shank ram-rodding his point of view into the proceedings. In fact, anyone who buys into this storyline is at best completely oblivious to how businesses are owned, funded and operated and at worst an imbecilic liar.

What bothers me about this particular narrative is the sheer laziness behind it, but hey, this is Shank. A simple Google search will pull up denizens of articles from the Mirror and other British publications lambasting Henry for – you guessed it – being too wrapped up in his failing baseball enterprise.

The truth of the matter is that Henry’s getting it from both sides of the pond – being simultaneously accosted by a bottom feeding Boston media and an insanely paranoid and distrustful Liverpool fan base who view Henry as another Yankee in over his head in a game he knows little about. Whatever side people fall on really doesn’t matter – it’s just pitching a fit for more attention and something that Henry shouldn’t be obliged to address.

Liverpool is funded by its own revenue streams and investors. It has its own payroll, its own expenses and its own needs. Same for the Red Sox. Both are fully self-sustaining, needing little to no capital investment on the part of Henry – meaning his financial future really doesn’t dictate a lot of what’s going to happen with either franchise.

Long story, short – while you could probably count on him selling his shares in either team if his portfolio hits the skids, it’s not likely to have a tremendous bottom-line impact on either franchise’s ability to operate at the level they are.

Bottom line is that this is a stupid narrative designed to work stupid fans up into a stupid frenzy. Enough already.

When legacies get soiled by association

I’ll give the book a chance, but it already seems apparent that Francona chose the wrong guy to write his book. CHB’s a heel writer – someone who exists merely to make us all want to pull our hair out. But the fact of the matter is that there isn’t a writer in New England who’s garnered more attention by writing not-so-friendly stuff and his complete lack of credibility with many Red Sox fans undermines the impact of Francona’s side of the story.

I’ll borrow it and read it (I won’t be buying it) before passing TOO MUCH judgment on it, but it’s going to be hard to sift through CHB’s bad guy filter and read about Francona with the attentiveness he’s earned.