You Can’t Always Get What You Want 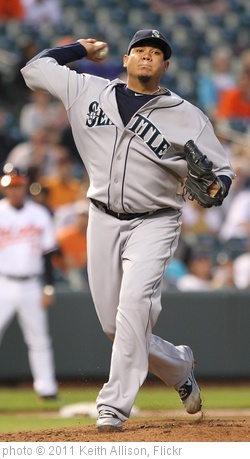 Disclaimer: I’m trying something new this week. The original plan was to write about everybody’s favorite trade target – Felix Hernandez – and his new contract with Seattle. Then I read this piece of brilliance.

I decided I’m going to put my own spin on that idea – I’m going to take the Felix Hernandez signing and turn it into the most ridiculous Boston media-esque column possible. Believe me, I feel dirty all over for doing this, too.

So here’s your warning: These viewpoints do not represent Fire Brand or myself and shouldn’t ever be adopted by anyone.

It’s just another misstep in a flawed offseason for the Red Sox.

After failing to make a splash for the second straight winter, I shouldn’t be surprised. I guess I just hoped for more.

So far, the Red Sox offseason hasn’t yielded anything in the vein of a real impact player. Mike Napoli, Shane Victorino, Ryan Dempster… these aren’t guys that make you a contender. Josh Hamilton, Zach Grienke, and Felix Hernandez are those guys. And so far, Ben Cherington is 0-for-3.

Felix Hernandez is a winner. He would have brought to Boston the dominant arm and unshakeable confidence this team has lacked since Curt Schilling retired. He would be the kind of guy that brings you a win every five days; who can snap a losing streak and start a playoff game one.

Instead, he’s now staying in Seattle, because Ben Cherington refused to part with Franklin Morales and Pedro Ciriaco to obtain him. I always viewed Hernandez as an inevitable member of the Red Sox – similarly to Adrian Gonzalez – and now I’ll have to deal with the fact that he won’t be.

Hernandez pitches until the job is done, and not before. He’s won 98 games in his career with the Mariners – 13 more than supposed “ace” Jon Lester and 32 more than Clay Buchholz. He would have been the centerpiece for a new-look Red Sox team.

Instead, he remains in the Pacific Northwest.

He’s not the first can’t-miss player the Red Sox have, in fact, missed. The offseason’s two top prizes – Josh Hamilton and Zach Greinke – inked contracts elsewhere this winter. Greinke specifically will be joining former Sox Josh Beckett, Carl Crawford and Adrian Gonzalez on the Dodgers next year – three players who left holes the Sox have yet to fill.

There’s still time to turn this offseason into a more encouraging one. Kyle Lohse – owner of a sub-3.00 ERA last season and 30 wins in the past two – is still inexplicably available and would provide the kind of winning presence this team sorely needs.

But he’s not the pitcher Hernandez is, and with teams like the Angels and Dodgers stocking up on premium talent, the Red Sox are on the fast track to obscurity without making some kind of impact move soon. None of the moves Cherington has made to this point are encouraging in that regard.

I can’t do this anymore. It’s too much.

If I reference pitcher wins one more time, I might have to start hitting my head against the wall as punishment. How do people do this? It’s insufferable! I even made myself use ESPN for player stats instead of Fangraphs…

There was a point here, though. Somewhere.

In all seriousness, Felix Hernandez has been Red Sox Nation’s unrealistic trade obsession for years. Now that he’s signed with the Mariners, can we lay that to rest?

I like Hernandez as much as everybody else, and of course I would love for him to pitch in Boston someday, but a trade bringing him to Boston never really seemed realistic. He was never close to entering free agency, and made it clear he wanted to remain in Seattle long-term. On top of that, before this year, the Red Sox’ farm system wasn’t exactly inspiring. What deal was there, really?

Ben Cherington has a pretty clear vision for the future of this team, and it’s centered on the farm system. The players brought in this offseason allow short-term flexibility while the younger guys you’ve heard so much about right here get ready to contribute. I look at our minor leagues and I’m legitimately excited; I wouldn’t deal Bogaerts, Barnes, Bradley, or Webster unless the offer for them was absolutely outrageous.

My point is, it’s time Red Sox Nation stopped pining after big-time signings and trades and got on board with the youth movement Cherington is pushing. I know most Fire Brand readers already understand this (and you guys are awesome for that, really) but there are still plenty of people out there who aren’t, and those people are, well, wrong.

The moral of the story?