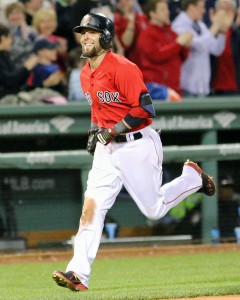 With the series tied at two games a piece, the Red Sox and Yankees played the rubber match of the 3-game set on Thursday night. David Ortiz gave the Red Sox an early one-run advantage after he cranked his 31st home run of the season off New York’s starter Chris Capuano. An inning later, with a runner on first, it was Ortiz again getting the best of Capuano, as he collected his second home run of the game. Pitching with a 3-run advantage, things quickly came unraveled for Brandon Workman in the bottom of the third. After retiring the first batter of the inning, the 24-year old allow a single to Ichiro Suzuki, and a walk to Jacoby Ellsbury. Derek Jeter then stepped to the plate and grooved a fastball over the head of Mookie Betts for a 2 RBI double. A batter later, Carlos Beltran whacked a single into right and chased home Jeter from second, knotting the score at 3. The game didn’t remain tied for very long though, as Brock Holt lead off the fifth inning with a home run that just cleared the right field fence. Meanwhile, Brandon Workman kept the Yankees offense at bay for 6 innings, limiting them to just the three runs he surrendered in the third inning. Left-hander Tommy Layne and set-up man Junichi Tazawa followed Workman, and tossed back-to-back clean innings. In the ninth inning, Boston called upon struggling closer Koji Uehara to preserve a slim one-run advantage. Mark Teixeira greeted the veteran reliever with a game tying solo home run to right field. A batter later, Yankees third baseman Chase Headley slammed a hanging sinker well over the fence for a walk-off home run.