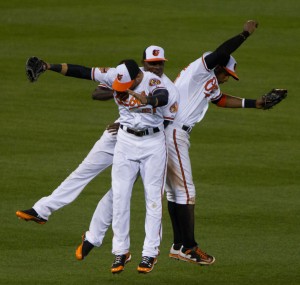 The first game of the American League Championship Series is set to kick off on Friday evening. The unorthodox match up of the Baltimore Orioles and Kansas City Royals contrasts well against the playoff regulars in the NLCS. Unlike Giants and Cardinals, this will be the first ever postseason meeting between the Royals and the Orioles. During the regular season, however, the two clubs me 7 times this year with the Royals taking a slight 4-3 series advantage. While the Orioles starter for game one has yet to be announced, the Royals have already made the decision to give James Shields the ball. So far this postseason, Shields hasn’t quite lived up to his “Big Game James” nickname; the righty has thrown 11 total innings, and holds an ERA close to 5.00. However, in two starts against the Orioles this season, Shields holds a 2-0 record with a 3.21 ERA in exactly 14.o innings pitched.

Hilarious watching my Twitter feed exist without baseball to feed it.