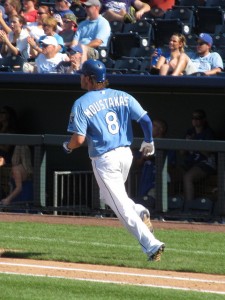 Without a doubt the most compelling storyline this postseason has been the utter dominance displayed by the Kansas City Royals. Currently up 2 games to none in the best of 7 American League Championship Series against the Baltimore Orioles, Kansas City’s fortune this October has come from all facets of the game. While the Royals starters have posted an ERA north of 4.40 through 6 games, their bullpen has provided reliable support with a 2.30 ERA; the lowest among American League playoff participants. During the regular season, Kansas City was not known for their ability to hit the long ball, in fact their combined 95 total home runs during the summer ranked dead last in the entire MLB. However, this postseason the Royals have tapped into their muscle and have cranked a league leading 8 homers; 4 of which have come after the 7th inning. Royals third baseman Mike Moustakas has been chiefly responsible for Kansas City’s power surge, as he has accounted for half of his teams home run total. Likewise, first baseman Eric Hosmer has made up a chunk of the Royals pop, blasting 2 home runs during the divisional series against the Angels. When Kansas City isn’t trotting around the bases this October, they’ve been springing around them. The Royals have currently amassed 13 total stolen bases, far and away the most among their postseason counterparts. Speedsters Terrance Gore and Alex Gordon each have 3 steals to their credit thus far, while Lorenzo Cain has accounted for 2 steals. After taking the first 2 games of the series in Baltimore, the Royals will return home to Kauffman Stadium, where they have yet to lose a game this fall.

Randy Choate, reminding us that lefty reliever is the only job with more security than shit-stirring Boston sportswriter.