If blood lines mean anything, the Red Sox may have hit a home run when they made center fielder Reymond Fuentes their first-round pick (28th overall) in the 2009 draft. 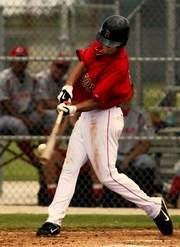 Fuentes, a high school sprint champion, was rated as the third-fastest runner among draft-eligible high school players. He’s been clocked in 6.2 seconds for the 60-yard dash.

Not surprisingly, Fuentes admits he models his game after his star cousin.

“I consider myself very similar to Carlos because when he’s playing, he just plays the game and nothing else,” Fuentes told The Boston Globe. “When I play, I get very focused on what I do. I don’t pay any mind to anything outside the game.”

Fuentes is rated as a line-drive hitter who has good plate coverage and extremely quick bat speed.

At 6-1, 165 pounds, he’s not a home run hitter but could add the long ball to his arsenal if he increases his muscle mass and strength.

His range in center field is above average but he has a below-average arm.

Fuentes, who bats and throws left, is considered by Baseball America as “an electric, game-changing-player whose contact-oriented approach and superior speed make him an ideal leadoff hitter.”

Fuentes popped up on Boston’s radar screen two years ago when he caught the attention of Edgar Perez, the Red Sox’ scout who covers Puerto Rico.

Based on Perez’s recommendation, director of amateur scouting Jason McLeod made several trips to Puerto Rico while general manager Theo Epstein saw him this past spring.

Depending on who you talk to, inside and outside of the Boston organization, Fuentes also is compared with players like Johnny Damon and Alfonso Soriano.

The Red Sox feel that a player with Fuentes’ overall athletic ability is capable of playing all three outfield positions, which is noteworthy considering other highly-rated outfield prospects in Boston’s farm system, like Josh Reddick and (when healthy) Ryan Westmoreland.

“He’s really athletic,” McLeod told The Globe. “I think that’s the first thing you notice when you see him. He’s kind of a lean, wiry-bodied kid right now. But first and foremost, speed is going to be part of his game. He’s a plus-runner.

“We really think he has an opportunity to be that leadoff-type player that can give us very good defense in center field (which is where Fuentes has been playing at Greenville) and, hopefully, be disruptive on the bases as well.”

**EXTRA BASES: Through his first 52 games with Greenville, Fuentes was hitting a respectable .279 with seven doubles, five triples and three home runs – replete with 24 RBI … But Fuentes had drawn only seven walks and had struck out 48 times.