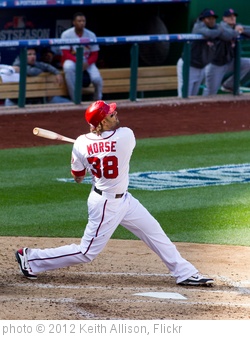 It’s a new day, and no, there has still been no news on the Napoli contract front. The two sides are evidently still apart on a contract, and while the Red Sox front office continues to express optimism that the deal will get done, there’s still nothing more than speculation for the moment.

The situation is still changing, however. The Sox top contingency plan for Napoli, Adam LaRoche, inked a new deal with the Nationals on Tuesday. While this isn’t a major blow for the Red Sox by any means – a LaRoche signing would have included draft pick compensation, which would seem to be a point of hesitation – it certainly does change the complexion of the negotiations with Napoli.

Put simply, the options for the Red Sox at first base are dwindling. The free agent pool is down to the Casey Kotchman/Carlos Lee tier, which is barely an upgrade over late-season starter James Loney. Staying internal, they could try Jarrod Saltalamacchia at first, although his bat is limited in its own way and the Sox would lose their flexibility to deal Salty for another piece in the future. If anything, signing Napoli is now more crucial than ever.

Could it be, however, that the LaRoche signing opened up a more attractive option than the 33-year-old first baseman, should the Napoli deal fall through? With the re-signing expected to make 1B/OF Michael Morse available on the trade market, it’s certainly a possibility.

Morse was a starting outfielder for Nationals last season after he exploded onto the map with a breakout 2011 campaign. After a disappointing 2012, however, he now founds himself without a home in the starting lineup, since LaRoche is returning to man first base and newly acquired Denard Span will fill his spot in the outfield. While the Nats’ front office may say they’re open to keeping him, it would seem likely a trade is in their future.

With that in mind, is Morse a legitimate option for the Red Sox?

First off, you should know that I live in the Northern Virginia area, and as such, I hear quite a bit about the Nationals (as well as far, far too much about the Redskins). Their recent success has been infectious; I likely own more Nationals shirts than Red Sox ones now – although don’t worry, there can be no doubt as to where my allegiances lie. So when Morse broke out in 2011, I heard plenty about it, because between the underachieving Capitals and the continually awful Redskins and Wizards, the Nationals’ suddenly bright outlook was the talk to the region. I’d never taken much time to examine Morse’s career beyond that, however; I essentially took it on faith that he was a quality player because I ultimately wasn’t quite interested enough to research him further. I knew I wanted him whenever I played MLB 12: The Show, but that was about it. With that in mind, I took brief break from my usual daily entertainment of exploring the ESPN profiles of terrible players – 2012 James Loney was arguably as good as 2012 Ryan Howard, in case you were curious – to make an excursion into the magical world of Fangraphs and stack him up against Napoli. Here’s what I found:

We can safely score this round for Napoli, although neither of player quite set the world on fire last season. Napoli’s fWAR sets him roughly around a league-average player, while Morse’s puts him sizably beneath that. In addition, both players struggled with injuries; Napoli managed 108 games while Morse played in 102.

Both players are not exactly what you would call “disciplined” at the plate, but both bring plenty of pop, placing them both solidly in the “old man skills” category of batters. Also of note: Morse is apparently allergic to walks. We’ll take a look at that in a moment.

The Red Sox are clearly not paying for these players’ 2012 production, however, so let’s examine the career numbers of the two.

It’s again a fairly close comparison, although Morse has substantially less significant major league time to go off of. Both have been prone to strikeouts, but Morse’s complete aversion to drawing walks means his on-base abilities are solely predicated on his ability to hit.

That leads me to my biggest concern about Michael Morse. Over his past 3 seasons (346 games) with the Nationals, he has produced astronomical BABIPs of .330, .344 and .339. While it’s possible he’s simply a high-BABIP hitter – and his minor league production before coming to the Nationals suggests that could be the case – any regression could be devastating to his offensive production due to the fact that he can’t draw enough walks to pick up the slack. In that way, he’s the anti-Carlos Pena, a player who can somehow churn out a yearly .340 OBP despite striking out 30% of the time and flirting with the Mendoza line every season.

But what is the cost of said risk?

Most reports have the Nationals seeking a left-handed reliever and/or starting pitcher depth. Considering the similarities between Morse and Kendrys Morales, it would be reasonable to assume that the deal would be somewhat similar to the one that sent Kendrys to Seattle last month (Jason Vargas). The natural fit in such a trade, at least in my mind, would be Franklin Morales, a relatively similar pitcher to Vargas last year (0.7 fWAR for Morales versus 0.8 fWAR for Vargas) who fills both of the Nationals’ needs. Given the Sox newfound youth at starter and overall bullpen depth, a Morales-for-Morse swap would be reasonable.

So what’s the final verdict here? Well, for starters, I think he’s a superior option to LaRoche should the Napoli deal collapse. LaRoche’s age (33) coupled with the draft pick compensation signing him would entail led me to believe he wasn’t the ideal fit for a Red Sox organization trying to preserve its youth and rebuild its farm system to being with. While Morales had a successful 2012 campaign, I think he’s a more than acceptable price should Morse become necessary, especially considering the Red Sox starting rotation is suddenly looking very full.

Ultimately, though, it looks as if the pressure may be on for the front office to get Napoli on board. Health issues aside, he’s by far the best available option at first base right now within the Red Sox price range. Should Morse get moved somewhere other than Boston, we could suddenly be looking at James Loney-level production from first base in 2013, and I think I speak for all of us when I say that’s something nobody wants to see again.