Wednesday Links: Another step closer to 2015 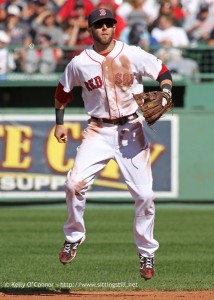 Of all the days to record your first clunker in the Major Leagues, Anthony Ranaudo picked his 25th birthday. After allowing at least 4 runs in 5 innings in his previous 5 starts, the right-hander lasted just 3.1 innings before being lifted from Tuesday’s game. After walking the first batter of the game, Ranaudo served up a two-run home run to Alejandro De Aza, and put Boston in an early two run deficit. De Aza, however, was not done terrorizing the rookie right-hander, as he blasted another home run off Ranaudo in the third inning. Just two pitches later, Adam Jones pushed Baltimore’s lead to 4 with a solo shot over the green monster. Boston’s only offense came in the form of Xander Bogaerts’ tenth home run of the season, and his second since the start of September. While he did allow six hits in 5 innings, Orioles starter Chris Tillman kept the Red Sox offense in check for the most part. After Tillman departed the game in the sixth inning, Baltimore bullpen allowed just one hit in four innings of work. With Boston down by 3 runs, newly promoted Red Sox prospect Matt Barnes made his major league debut, and tossed 3 shutout frames, collecting two strike outs along the way. Home runs and missed opportunities on the base paths was the name of the game for the Red Sox on Tuesday, as they dropped their bout with the Orioles by a final of 4-1.

The time spent watching the 2012 and 2014 Red Sox. Those are the hours I'll want back when I'm on my deathbed.