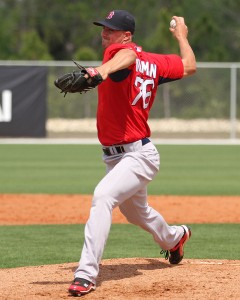 After losing the first two games of the series, the Red Sox tried to staved off a sweep on Thursday night in Pittsburgh. Red Sox starter Brandon Workman quickly found himself down a run, after he walked Ike Davis with the bases loaded and forced in a run. An inning later, the Red Sox put a run of their own on the board as Mookie Betts singled in Christian Vazquez from second base. With the score now tied in the fourth inning, the Pirates regained the lead on an RBI single by catcher Chris Stewart. The following inning, Starling Marte added a third run Pirates lead by blasting a solo home run over the left field fence. Overall, it was a very “bend but don’t break” start for Brandon Workman. While the right-hander held the Pirates to three runs in five innings pitched, the damage could have been a lot worse considering Pittsburgh collected seven hits and three walks. On the flip side, the 25-year old collected six strike outs (the most in his last ten outings), and showed poise by getting out of some big jams with limited damage. After Workman left the game, three different Red Sox relievers combined to toss 3 innings of no-hit baseball. Down by a run in the bottom of the ninth, the Red Sox loaded the bases with only one out, but their rally fell short as Mark Melancon retired the next two batters in succession.

Christian Vazquez singles to right. Only nine more chances for the Red Sox to be no-hit.