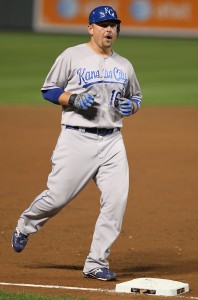 With their back’s against the wall, the Kansas City Royals took care of business in convincing fashion during Game 6 of the World Series on Tuesday night. The Royals offensive onslaught began early against Giants starter Jake Peavy, who only lasted an inning and a third. After the first two Kansas City batters reached base to lead off the second, Mike Moustakas opened the scoring with a two run double down the right field line. Moustakas’ double would be the first of three run scoring extra base hits in the second inning, while Nori Aoki and Lorenzo Cain also contributed with RBI singles. With a seven run cushion in hand, Royals rookie starter Yordano Ventura stymied the Giants batters over seven innings of work. While the 22-year old did issue five walks, he managed to keep San Francisco off the score board by allowing just three hits. Kansas City went on to tack on three more runs to their total, scoring individual runs in the third, fifth, and seventh. The Royals 10-0 shutout of the Giants means that we will see the first World Series Game seven since 2011.

If anyone needs me, I'll be locked in my room, enjoying the last day that I can say the Red Sox are defending World Series champions.