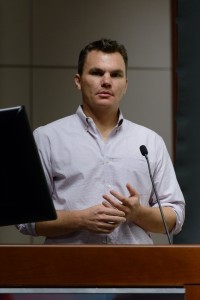 On Monday, General Managers, front office executives, and agents across baseball will convene in San Diego for the 114th annual MLB Winter Meetings. With all of the offseason baseball world in one place at one time, the Winter Meetings typically involves a ton of trade and free agent rumors and breaking news. In the recent past, we’ve seen big name players like Alex Rodriguez, Manny Ramirez, Carl Crawford, and Josh Hamilton find new homes, along with many others significant assets joining new rosters. While the Red Sox haven’t been as active at the Winter Meetings since giving Carl Crawford an ill advised 7 year, $142M deal in 2010, the team has the motivation and assets to make a big splash this time around. After signing Hanley Ramirez and Pablo Sandoval for a combined $183M, Boston has already had an expensive offseason and still has holes to fill. The team’s biggest need heading into the Winter Meetings is starting pitching, and trying to find an ace to head the staff. Once Jon Lester signs — whether it be in Boston or elsewhere — the rest of the starting pitching market will begin to take shape in the form of trades and free agent signings. The 30-year old starter is still mulling over 6 year offers from the Red Sox, Cubs, Giants, and Dodgers, with none of the four representing a true frontrunner. Earlier Monday morning, multiple reports indicated that it may ultimately take a seven year commitment to reel in the southpaw. If Boston winds up losing out on Lester, the team will be prepared with fall back options on the trade and free agent fronts. If pressed, I would venture to guess that Philadelphia Phillies left-hander Cole Hamels is Boston’s number one fall back option. The Boston Globe’s Nick Cafardo has reported multiple times that Philadelphia has scouted Boston at an alarming rate, which gives way to trade speculation. Like Lester, Hamels is a 30-year old southpaw with a ton of postseason success throughout his career. However, while Lester is staring down a possible 7 year, $150 commitment, Hamels has a much more reasonable 4 years, $90M left on his current deal. Of course, the down side in acquiring Hamels is that Boston would have to part with at least 2 or 3 of their top prospects. Philadelphia is reportedly enamored with Mookie Betts, and therefore would center a potential deal around the 22-year old. Overall, Hamels is just one of Boston’s many options on the trade market this winter. Starters like Jeff Samardzija, Ervin Santana, Rick Porcello, and David Price could also peak Boston’s interest as they reassemble their staff in San Diego.