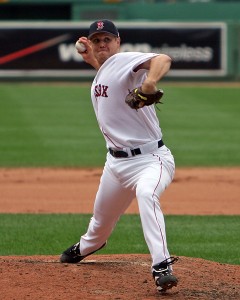 With of Jonathan Papelbon reportedly close to being shipped out of Philadelphia, let’s look back at his career in Boston which awarded him with a 4-year, $50 million payday from the Phillies.

After being selected in the fourth round of the 2002 amateur draft, Papelbon’s short 58 game stay in the minor leagues was mainly spent as a starting pitcher. After two full seasons between low-A and high-A, the right-hander’s fast track to the majors hit its stride in 2005. Papelbon spent a combined 19 games in double-A and triple-A, and was later summoned to Boston. While Papelbon’s major league debut came as a starting pitcher, the team mainly used him out of the bullpen. Following injuries and ineffectiveness of former closer Keith Foulke, Papelbon’s mid-90’s fastball made him an obvious candidate to take over the position. Subsequently, Papelbon took a liking to his new role, and collected 35 saves and a 0.92 ERA in his first season as the teams closer in 2006.

From then on there was little question who would be pitching for Boston with a lead in the 9th. Papelbon collected over 180 saves and 400 strikeouts from 2007 to 2011, and was selected to three All-Star teams. Even pitching in the postseason didn’t seem to bother the Louisiana native, as he posted a 1.00 ERA 27 innings pitched and locked down the Red Sox 2007 World Series victory.

Following the 2011 collapse of the Red Sox, Papelbon hit free agency for the first time in his career. With little resistance from the Red Sox, the free spending Philadelphia Phillies gave the closer a 4 year, $50 million deal. While the Phillies have been dreadful since signing him, Papelbon has been nails out of the Phillies pen, pitching to the tune of a career 2.45 ERA over his 3 season stay. While allocating $50 million to a reliever is usually ill-advised, especially for a team on the outs like the Phillies, Papelbon has justified his money.

As the Phillies try and regroup as an organization, they’ve taken every measure imaginable to deal the 33-year old closer. For the past two seasons, the team has virtually tried to give him away by agreeing to eat most of his contract, but they’ve failed to find any takers. Most of the concern around the closer is in regards to his open and honest personality. Papelbon has never been one to mince his words or actions, which has subsequently landed him in hot water more times than one. But with the news of a potential deal between the Phillies and the Milwaukee Brewers, Philadelphia might soon rid themselves of Papelbon.